i don't have the time currently to respond to all of them so i'll pick some of my favorites:

TropicalDeer yes!! more dinos!! dinos are fantastic and good and i love them. [especially those glow stickers holy shit]
also, mike is beautiful and deserving of all love

Serendipities that's so cute!! interestingly i've never been super attached to blankets, even though i was attached to many other things as a kiddo

6 Jun 2018, 1:53 pm
in what are your comfort items? (go to post)
hi! so recently i've been thinking about comfort items and how much mine comforts me, and i thought that maybe others, like me, would like to share pictures of theirs! so this is a thread where you can do that! [bc honestly i'm curious to see em too]

this is mine! her name is veralidaine and she is a 2016 torch my blazin dragon by furreal friends ;v; i love her sooo incredibly much lmao

Leafeon1010
aa do you still have him? if you do and would like to keep him around, it's easy to have him change back into one you like!

lemurteeth
aAh I love the tuxes from 1998!! how long have you had him?

MartyMcFly
oh gosh my 98 was accidentally resetted from english back to furbish and it's taking him SO long to learn english again :'') if yours was a gray one with a white belly, he was probably a wolf furb!! mine is an owl, who's solid gray

Odorokasu
i LOVE that color!! they're arguable one of my favorites!! what's her name?

D0ZE
do you still have your furb?

it's cool that more and more people are into them!! especially the customized kiddos, they're so good ,, i'm planning on changing my own 98s eye chips actually!

Kokiwawa
oo would you ever be interested in getting back into the fandom? if you mean 1998s, they're super common on ebay/mercari and for relatively cheap as well!

Muma
like i said to kokiwawa, if you're still interested in fubbs you could find them very easily on ebay or mercari!! those two colors are relatively uncommon from what i've seen, but you could always get into trading furbs too to eventually get those kids

2B
aH i love seeing people who still have and love their furbs!!
is miku a 1998?

MochaWishes
omg that's my favorite color of the 2012s!! they're so good,,,

if you're afraid of them, have you ever considered selling em on ebay or mercari? as the furby fandom grows a lot of people want furbs ,, hell even i might buy em lmao

avoidthenoid
30!!! do you often turn them all on?? man i could only dream of having 30 that sounds like the greatest thing,,

evab100
wOAh what kinds do you have??

i have one 1998 furb, he's an owl type and his name is poof. i also have one furb comin in the mail - he's a 2005 and his name will be nebbert. i have a furby blog on tumblr if you'd like to see some pics! link

please talk to me about your furbs!! i'd love to see them!

this babe has a similar body shape and hair that I do but ,, that's about it lmao

well. the eyes are blue/green and so are mine but mine are a weirder, duskier kind that change btwn green and blue

29 Mar 2018, 4:07 pm
in Spring character clean out! (Free + pay) (go to post)
Manitka
hmmmm if it would be okay with you, maybe seeker instead? i connect a lil more with ophelia but if you'd really rather prefer ophelia shes fine!! ;v; 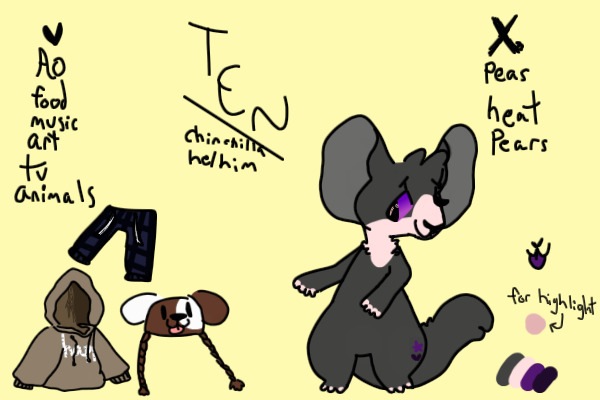 this is my lil chinchilla boyo, his name is Ten!!

my secondary fursona is a cat ferret cross but they're not done yet ;v;

good luck selling the others!!

would you be at all interested in characters? if not I'll leave you alone lmao, I just really like his design so I wanted to ask!!

Our knight in shining armor! A friend to everyone!

AAaAH I don't know if this was a misping or not but ?? holy crap I'm literally going to cry??

my TH username is hedgie

any of the ones in https://toyhou.se/hedgie/characters/folder:unsorted unsorted here [except monroe, it's refusing to let me move her to another group!!] are for trade.

30 Jan 2018, 3:38 pm
in err, were wardrobe slots always so much? (go to post)
RedlaSunShowers029
it sucks because a .. well, quite a long time ago, in 2016, I applied a paintie to my already paintie'd villager and expected to be able to buy a slot for the next one to switch between them but never had the money and went inactive for a while. just now I was selling things, expecting it to be 25,000, but it's 75,000 !! I was very shocked haha, I forgot about the price tbh

heck, I need so much more fc to buy a slot now ;v;

I didn't see a sb anywhere so I'll just offer this ;v;