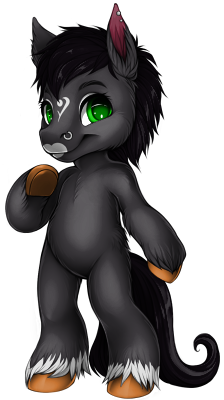 Originally learning to wield a blade for combat. Phanolu found herself critiquing them rather than swinging them, and in due time found a love for striking iron into perfection.

Phanolu herself is a hearty horse, who loves making crude jokes ending with a boisterous laugh and a hard pat on the back.
She's rather unaware of her own strength however, but will at least say sorry in a roundabout way.

Although she majors in weapons and shields she actually loves making delicate decorations such as piercings. However, no one besides herself has been willing to try them. Much to Eliery's relief after what happened last time.