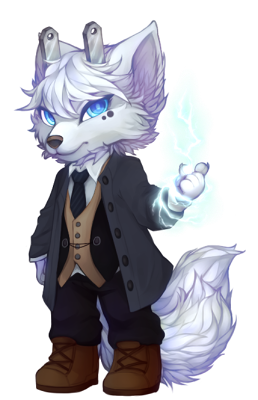 A stoic and cold fox, Albone is very hard to get close to. Blunt, easily annoyed, and anti-social are some common descriptions of him. Despite this, he is very refined and proper, retaining his perfect gentleman aura.

He is an Experiment from a project known as CellVation, where DNA is fused with items to grant the fused one powers. There are two types: Experiments, who are born through science alone, and Determinants, who were born like normal beings but altered later on.

Albone has powers over electricity, stemming from his DNA fusion with a power cord. He's able to levitate a few feet from the magnetic field he outputs, and when angered, he can create terrifying lightning storms. The other CVs know not to mess with him.

He treats Tannyte like a baby brother, and would do anything to protect him. While he prefers to be alone, he seems to have a fondness for an old childhood rival despite how annoying he can be.