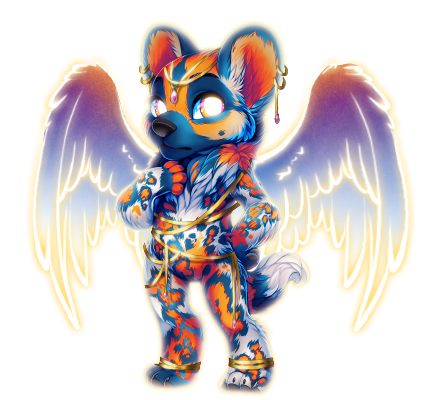 A Fallen Star
A glimmering spray of dots broke the air. The tension of a once solid reflective pool erupted and sank for a moment. Calming ripples radiated out from an island of sleek clumping fur. Erhamis blinked her eyes a few times, wincing when droplets froze on her lashes. Ice surrounded her on all sides. She was bobbing in an expanse of broken glass. Yet, she began to sweat.

To most any other creature, it would have been cold and hypothermia would soon set in. She scanned the horizon in front of her; full of protruding growths that seemed to reach toward the light. Squinting, she abruptly pulled her gaze back. Her sensitive pupils narrowed and shrunk. Unable to find comfort in any position of her new surroundings, she sank back into the water. An oval of darkness appeared lower in the liquid as she opened her eyes again. She swam toward it.

Ehramis didn't need any oxygen. After all, there wasn't any in the depths of space. She was accustomed only to feeding off of intergalactic plasma (composed partially of hydrogen) and far removed light from distant stars. It was quiet beneath the water, though not as quiet as she was used to. In fact, she'd probably tell you it was quite noisy. But here in the darkness, out of the path of sunlight, she rested,

She didn't get much rest however. It was much too warm. But Ehramis was used to staying awake for years at a time. However, she was nearing the point of Ga'Lana (Earth translation: collection) again which would be followed by many planetary orbits before she would next awaken. I suppose you could call it a form of hibernation.

Yet again she broke the ice on the surface. This time- from the opposite direction. She swam toward the bank and immediately felt better. Her wet fur froze in the cool air of night and she was chilled more comfortably. The shimmering wings on her back were stiff and in need of repair. At first they stung, but were numbed a bit by the ice forming around herself. Now, it was safer to look around. Her pupils enlarged to almost the full surface area of her eyes. Neck craning back, mouth parting- she audibly sighed and began to wonder if she'd ever be able to return before Ga'lana.

Over the River and Through the Wood
These gnarled and vertically growing protrusions were quite unique. She thought they resembled nebular tendrils. Then again... she paused, They also reminded her of the expansive mycelium network she had observed on a planet from the Zich'rath solar system (Earth translation of Zich'rath: TRAPPIST-1). Said planet was smaller but the networks spanned thousands and thousands of titches (Earth approximate equivalent to 1 titch: 1.74 miles).

Due to the sheer amount of space needed for one nexus on Zich'rath, there were only a handful of genetically diverse mycelium colonies on the surface's entirety. The growths here, in contrast, were numerous and so different that it uplifted Erhamis to the point of smiling. Her fingers snapped a wispy length off of a brown hard growth. She smelled it but was immediately repulsed by the sharp twang that hit her nostrils. Her paw unfurled and the twig fell gently on a bed of moss. Off-put by the encounter, she stepped forth into the forest to make sense of her surroundings.

uuurrrhhhhg Ehramis spun to her left- ears back and her body low against the young plants and shrubs. Something is out here she thought. She surveyed the area. The panoramic scan did not yield any useful information but she heard that sound again. Rhhhgg This time it was louder and she flung herself in the direction of the noise. A fiery glow of anger met her full on. The beast's claws sank into her shoulder and chest as she reached for anything she could utilize as defense or weapon. Her hands quickly found a branch. She swung. The creature cackled in pain and flew off into the dark.

She could see it's glow fade the further it traveled. As soon as it disappeared, she clutched her upper right chest. She was spilling precious plasma. The murky, somewhat clear liquid was sticky and left a thermal glow on the foliage beneath her. I need to find somewhere safe. In the distance, she heard faint cackles, similar to the ones she had just fought off. It tingled her spine. Ehramis plodded opposite, into the dim light.

In Flames
Ehramis stretched carefully. Eyeing her healing wound- her fingers traced the fresh scar gingerly. It had been a few days cooped up in the hollowed base of a tree and she was eager to leave. She decided to set up residence in a nook on a bluff she had passed. She was in no state to confront anything that could have been living inside at the time. So, she had settled on the tree base. But, after watching it closely over the past few days, it seemed uninhabited.

She christened the walls with a rendering of her foe and prepared to find resources. It began to sink in that she would be here some length of time... Her fingers smeared some plasma onto the wall. She wrote, Eir'a Hedem (Earth translation: Flame Demon). 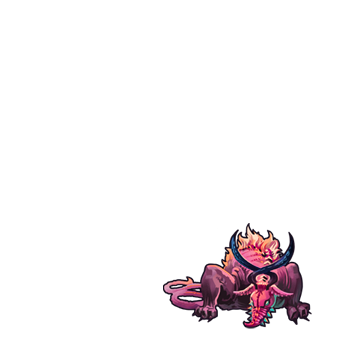