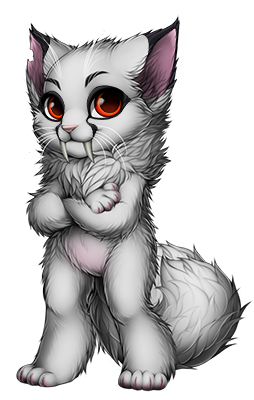 Personality (INFP | Chaotic Neutral):
+ Fiercely independent & self-sufficient, but very loyal to those who earn her trust. Has a unique sense of humor and loves to make people laugh. Strong, hard-working, and dedicated when she puts her mind to something. Above-average intelligence. Understanding and tolerant, and often goes by the motto "live and let live." Loves to learn. Resilient. Experienced in many areas of life. Is very observant, and an excellent listener.

- Can be quite apathetic and cynical. Suffers from severe depression and social anxiety and often goes into seclusion. Has a habit of shutting people out and is very hesitant to trust. Perfectionist to a fault. Sometimes cares too much about what people think. Gives up easily. Intense anger, guilt issues and unresolved grief cause her to lash out at people she cares about. Jaded from long years of rough living. Very stubborn and hard-headed at times. Has an addictive personality. Quite impatient.

What is a nekomata?:
Nekomata are a type of cat yōkai (spirit) from Japanese folklore. Traditionally, there are two types: a giant beast that inhabits the mountains of Japan's countryside, and a house-cat that transforms once it reaches a certain age. The common theme between the two is that they have two tails and are demonic beings. Spot happens to be the former - a nekomata who was born that way. Backstory:
Spot has been my fursona since around 2001. She is basically me, just in anthro form. :3

She is a shapeshifter; her two most common forms are the nekomata which you see here (approximately the size of a serval), and the Sentient Hellhound (my original species). When she shifts, she always retains the white fur with black markings on her ears and face, the mohawk-like mane, a piercing in one ear and notch in the other, and red eyes. She can be seen with or without wings.