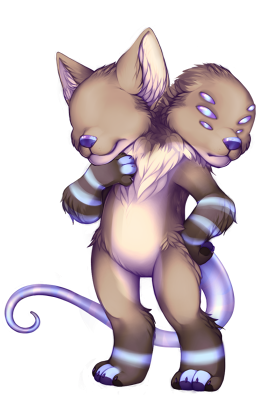 Where exactly they came from is a mystery, and how they function even more so. It is said they were an experiment gone wrong, and that it was not expected for them to survive. How exactly they are even a possibility remains unclear to science.

Hatchet is blind and Spock is deaf, but it is thought they can communicate telepathically. They both know how to speak, and while it is unclear if Hatchet actually 'sees' what Spock can, or Spock 'hears' what Hatchet can. Whatever the case, both heads respond as if they do not posses disabilities.

This simple fact can be unnerving to those not used to their presence. When Hatchet seems to stare at you and Spock seem to listen, it is of something from a nightmare.

If one can push past their first visual impressions, however, they will be likely to find at least one friend. Hatchet is rather friendly and happy to meet new people. He is a true and noble doctor, compassionate to all and inconsiderate to none.

On the other hand, quite literally, Spock is an alchemist. He is a curious, cruel creature. Spock has no boundaries, and isn't afraid of doing questionable things to the few for the better of the many. In fact, his alchemy is often times for the good of medicine.

For the most part, Hatchet can keep Spock under control, but there's no telling if they'll give you a life saving medicine or a deadly concoction.