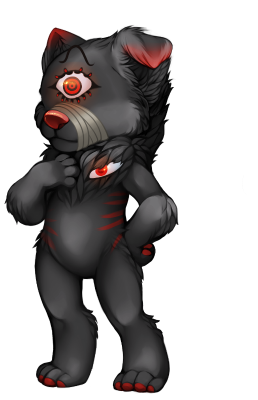 Malice no longer has a house! They will be unable to work. Please replace the house or move Malice into a FC slot.

Malice is a hermaphrodite* species, meaning he is both male and female, but prefers to be called 'he', as he hates the use of 'they' or 'it'. If you call him a she, he will not be mad at you, however.

He is a scientific, 'no nonsense' sort of creature, and prides himself on his use of logic and reason. He isn't unfriendly, and in fact is rather hospitable, despite his sometimes cold atmosphere.

Malice bandages his muzzle to prevent scars from being seen, as he lost his tongue in a sorry, sorry accident. He is telepathic, and while he might be silent, he can hold a conversation with several people while remaining so - transmitting his thoughts to up to five people at once.

*With people talking about how the term hermaphrodite is not the 'proper' term, Malice is of the scientific community and prefers to use the more scientific term.