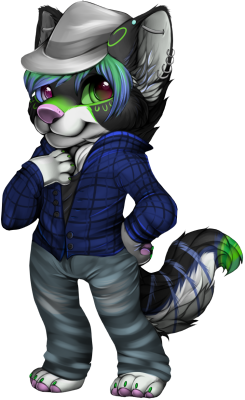 Toxic again, is practically ME in when im online. She's my second ever character to be created when I was young, and she is my side fursona. I had come up with her through a rp, and just couldn't bare to get rid of her forming a strong attachment to her. As her personality describes, shes very shy and rather timid when you first meet her. She finds it hard to carry conversations with people she just meets, or doesn't know well, however shes very friendly. She is always talking loudly or quickly and cursing up a storm. She has a good, but sick and twisted sense of humor, but in general shes a pretty good gal. Shes VERY protective over her friends, and those she considers her family. She will literally fight to the death, and risk getting herself into trouble just to help them out, and be that shoulder to cry on. She enjoys listening to others, and helping others very much, and though shy she LOVES making new friends. Most of the time she is rather cheery, and always jumping up in down in place.

Toxic grew up in a small kingdom, which was ruled by an evil king. Her parents were killed at a young age, and she had been split from her brother Ian. Months later she arrived at a small town, lost and scared for her life unsure exactly where she was. She had come into contact with another Coywolf, one who looked similar to her but he was older, and had clearly been through more than she had. As she stayed with the male, she learned of the kingdom and towns magical powers that it held. Deciding to take it into her paws, she learned one called "Time travel." this skill allowed her to show others her past through her memories. It would envelop around her and the one she chose to show as the even would take place around them, this, is how she found her brother once more. At one year of age she got her thing the rebellion of the kingdom called "gifts" she was assigned water. Time went on and the kingdom was saved, now she roams the lands far and wide searching for more in life.