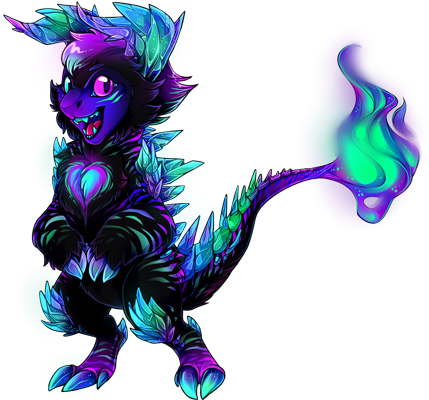 Tanzanite is undoubtedly one of the sparkliest villagers in Silverflecked Village, giving both Heir and Tricky a run for their money, the latter of which didn’t think was possible. The Ashfurn appeared from the expansive cave system that runs beneath Silverflecked Village, causing Rain to start thinking of sending an expedition team down in the caves-- they are much bigger than she had originally thought. It was Tricky who first found her, and both were startled enough to nearly attack the other! After, thankfully, an introduction without violence involved, Tricky brought the mysterious creature up to Rain, and after a bit of talking, invited the Ashfurn to live in Silverflecked Village. Tanzanite was almost on the verge of sensory overload since it was the first time she had been above ground, but not even the dizziness could damper her unbridled enthusiasm. Of course, she said yes.

Tanzanite's early life is pretty uneventful. She was born dangerously close to a stream of lava which flowed through the cave that runs under Silverflecked Village, and raised herself all on her own. Of course, it was pretty difficult at first. Ashfurns typically don't have night vision, so the first parts of her life included a lot of stumbling around. Sometimes she even cursed her parents for allowing her to hatch in such a dark place. But eventually, she got the hang of it. Making meals of insects, salamanders, and even bats if she was lucky, Tanzanite made a living in the caves. She learned to memorize the caves in the dark, mapping out the expansive system in her head and drawing it on the wall with her claws. She learned that some fungi glows, and that there are even species that glow due to heat, and made makeshift lanterns out of them. She decorated her den with gemstones and trinkets of bone, and made a bed out of moss. Her daily life was repetitive, but Tanzanite had grown accustomed to it.

One day, Tanzanite decided to explore up instead of out and around her base. Climbing had never been her strong suit, but the Ashfurn was able to make it up through the hole in the roof of one of the caves. She continued exploring up, quickly finding that it was incredibly tiring. But, just as she was about to head back, disaster struck. Just her luck, the cave began to shake and rumble. Tanzanite didn't know what an earquake was, but she knew it was bad. The Ashfurn flew into a panic, running all over as dust was showered down upon her. The earthquake didn't last too long, however, and Tanzanite was able to take a breather. Luckily, nothing had collapsed on her. Unluckily, in her panic, she had forgotten the way back to her den. Not able to get back home, Tanzanite continued going up in hopes of something, anything that she could use to help her. She travelled for days on end, and just when she was about to give up, she saw a mysterious creature of sparkling red and purple. That creature was Tricky, and the rest is history.

Having lived in a cave for most of her life, Tanzanite had some struggles adjusting to living on the aboveground. Her eyesight is pretty poor during the day, and while she's fine at night, one of the crafters had to make a set of glasses for her to help with the sunlight and blurriness. She is also horrible at stealth, and can't exactly tell when there is danger to be wary of. But, there are a few advantages to having been born where she was. Since she was born by a lava flow, her hide is incredibly tough and nigh impossible to break. Her horns are beautiful and deadly, perfect for fighting and probably impossible to even chip. Like all Ashfurns born too close to lave, her fire is the hottest of her species. This acts as a great defense mechanism, weapon, light in the dark, you name it! It also draws others close to her whenever its cold, which Tanzanite doesn't mind one bit. She actually loves snuggling up to others, and she's a great cuddler! Tanzanite is also a pro on rough terrain, able to climb on rocks for weeks. Despite her weaknesses, Tanzanite is an asset to the village and a great friend that nobody would want to lose.

Admittedly, Tanzanite is a bit lacking in the "ambitions and life goals" department. When every day brings a new experience, why commit yourself to one thing? As of now, Tanzanite is just happy to enjoy life and roll with any punches that it might throw at her. As for a partner, Ashfurn or otherwise, Tanzanite surely wouldn't mind having a mate, but it's not really a concern for her at the moment. Though, Tanzanite has been known to hoard eggs and see what might pop out of them, watching over them until they hatch so that a loving parent or parents might take care of them.

My birthday villager! Their ID is that of my birthday, December 19th. <3