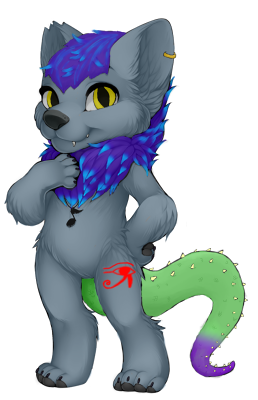 Shy; prefers to keep to self.
Loves friends & family
Kind of an ass & sarcastic
Extremely smart

As a pup, Khān never really fit in. He was always teased because he was different. Growing up, he never had anyone to turn to, and since, has developed sarcasm as a defense mechanism, along with pushing almost everyone away. Diagnosed with severe depression, he has frequent mood swings; one minute being overly happy, the next, locked in his bedroom drawing out his sadness/anger.

Due to his negative childhood, he's grown to strongly dislike 99% of people. The only people he truly bonds to are those that share similar interests with him. His ear is torn at the tip from an old fight that got a little out of hand...

He loves nature and most every creature he can find. His favorite pass-time is usually sitting at home in front of the TV coloring, or going outside to catch wild animals- mostly spiders, lizards, and snakes. He will readily run to the rescue of any animal in danger of being killed. He'll gladly announce his opinion to those that disagree with his views towards reptiles/arthropods and will continue by adamantly standing his ground while attempting to educate others (even if some refuse to listen).