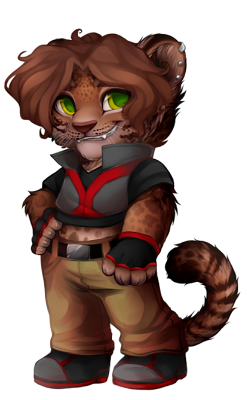 A flirtatious and outgoing guy, Jeminye seeks the thrills of life. He's hotheaded but extremely friendly, if not terribly obnoxious. His heart is in the right place, though, even though he doesn't tend to show any affection besides endless teasing.

He is a Determinant from a project known as CellVation, where DNA is fused with items to grant the fused one powers. There are two types: Experiments, who are born through science alone, and Determinants, who were born like normal beings but altered later on.

Jeminye is fused with copper, granting him the ability to manipulate copper and similar alloys. Much like Tannyte, he can create items from his metal, but he is a very offensive and quick fighter. He goes hard and fast.

He loves to bother his childhood rival, Albone, but doesn't really know exactly why he's so fixated on him...