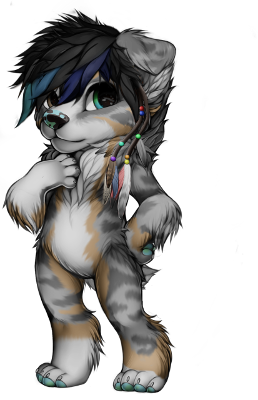 Esther no longer has a house! They will be unable to work. Please replace the house or move Esther into a FC slot.

Esther is a 22 year old Australian shepherd who's pretty much always in a bad mood. Easily annoyed, she's pretty hard to get along with. But make a connection with her, and you will have the most devoted, protective friend you've ever seen.

Esther had always lived in the same house her entire life, and could never imagine anywhere else as home. It was always her and her mom, and more often than not a new step dad who would be gone in a few months max.

Almost Esther's entire family lived in a similar way to her mom, and because of that, her family was large and diverse. She couldn't possibly keep in contact with every single person she's related to, but there are quite a few she keeps close including her cousin, three of her sisters, and a few scattered aunts and uncles.

When she was 6, a new family moved in across the street. They came from another country, and they both sounded and looked really weird. Her mom said they were called "painted dogs" and that they were moving from England. She was annoyed by them simply existing. Their obnoxious coat patterns always seemed to be prancing around the neighborhood, and she was determined to hate them forever. But the youngest member of the family who was only a couple of ;years older than Esther, just wouldn't leave her alone.

In her teen years, Esther fell into a depression and began to skip school and was rarely at home. Her mother had gone through a particularly...rough breakup with a recent boyfriend and was struggling to bounce back from it. Even her little sister Primrose was shaken by the ordeal and was home sick a lot.

As always, Pandora was there when Esther ran off to the woods. Whether or not she wanted to admit it, Pandora saved her life that night. Pandora began to grow on her, and after a while, Esther couldn't deny her gratitude for the painted dog.

On their first date, Esther brought Pandora to a carnival. She planned on winning her a stuffed animal to take home. Every year, Esther wiped the floor on all the carnival games. This year...she was shaky, and nervous, and messed up just about every game they tried. Eventually they came to the hanging rope bridge game, and Pandora decided she wanted to do it with Esther. Pandora climbed up like she was a squirrel on a telephone wire. Esther couldn't help but stare at Pandora's curly hair, and multicolored eyes...a trait she used to hate sharing with her, but now it only made her feel closer to her... Next thing she knew, she was on the giant air-mattress below them, staring at the sky. Pandora flopped down next to her a moment later, giggling as she helped Esther off the big bag of air. Pandora proudly presented a giant rasta colored llamacorn plushie to her. Esther's first reaction was to get mad and say she was too old for stuffed animals...but she took it from her anyway, thanking her and kissing her on the cheek. By the end of the night, they were down to the last game they hadn't already played. The prizes weren't that great- just cheap collars and charms. Of course it's this one that Esther manages to win, and she ends up with just a black and neon green collar with a blue heart charm to offer Pandora. Of course, Pandora acts like Esther had given her the world, and wore it the rest of the night.

Since then, the two are inseparable. They currently live together in Esther's family home, cherishing old memories while making new ones every day. Esther even proposed to Pandora last year, and they plan to be married once they save up enough money for their dream ceremony.

Base edit by me.