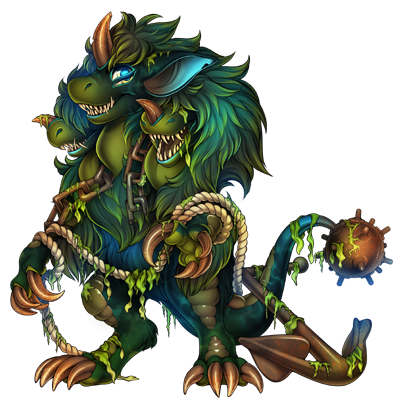 "We call this one 'Harley'. It is one of the species we are researching. None of our scientists can get close to these creatures unless they have a death wish," a sigh could be heard in the recording. "We lost too many. These creatures are too hostile."

"This one... this one especially. Harley. Compared to its twin, Willow, it's much more ferocious and feral... prone to attacking anything that dares going near it. Even small harmless creatures... even its own twin."

"It uses its claws, its mouth, its tail, everything to take down its prey. The other one sits back and watches, it doesn't do anything unless the prey is too much for Harley to handle. This is a very rare sight indeed."

Another sigh is heard, "I'm going conclude this Log, but before that, there is something else about Harley everyone should know. It... it has a... form?" there's a slight pause, "Yes, a form. It's very much like a... beast. There have only been two sightings of this beast form... Not even Willow can handle it. We think that, at least; Willow was never sighted near it when Harley took this form..."

"That is all I have for this Log on Harley. I will record another when we gather more information on Harley and its twin, Willow." End Log.

"This will be a very short Log. I have forgotten to mention in the previous Logs that both these creatures have venom. In both the spikes at the ends of their tails and their saliva.." End Log.

There is rustling of paper, "We have not pinpointed the names of these creatures. We refer to them as 'aliens', 'creatures'... 'things'. The names given are name tags."

There is a long pause in the recording.

"They don't seem to have other... er, family members. There have not been any sightings of others like them. Maybe they're hiding from us," a chuckle, "or maybe there are no others... maybe these two are the only ones left... We'd be very sad if they're the only two of their species alive."

"The only thing we know about them is that these two, they are inseparable -- hence 'twins' when we refer to them both -- even in the 'bad' times when Harley transforms. Willow is always close by, no matter what."

"We must know if there are others. If they show the same distinctive characteristics, if they stick together like The Twins. Researching these two is very important. We must know more of their species." End Log.