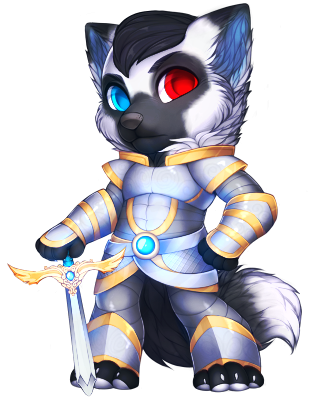 A Knight in Shiny Armour, protector of the innocent.
He never wants to take a life, but there were cases in wich that wasn't possible, he prays to the Gods every night, just before to sleep. Well, most nights.
This dog sees everyone as an equal and doesn't like to judge anyone ahead of time, a thing he sometimes regrets doing. He has learned to distrust everyone slightly, and doesn't open up to people easy, but despise this cautiousness, he stills runs to aid to whoever needs most.

A coffee person, he needs his morning coffee or he will be cranky and grumpy all day, seriously, give him his coffee.

Zhareb likes the simple things, nothing too fancy.
Black coffee, plain clothes, simple meals... He doesn't need much of anything, a bed, food and a good book will make him as happy as he can be.
He can't stand luxury and he even thinks his armor and steed are a little too overdone, but as a Warrior, he needs to respect the dress code.
Solitude and quiteness is something he looks forward every night, when he can finally rest from a good days work of slaining monsters and healing his wounds.

Uses a typewritter to write all his mail. Refuses to buy a "computer" or a "phone", wich makes a lil harder to be in contact with him, but they manage.

Zhareb has ben seeing around with Dulcinea a lot these past months, even inviting her to the Serpent's Festival, to wich she agreed to.
Rumors are that they may be developing romantic feelings for one another but neither of them are saying a word about it.

Edited version 'cause Im not paying full price for that