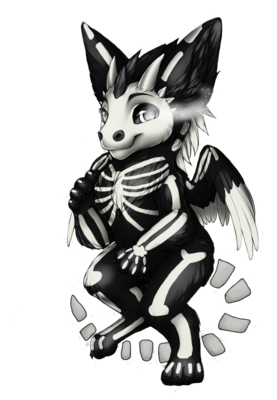 Agatha was always the odd one out in the Quetzal Palace. Her feathers were too dark blue for a Blue Roan, her eyes too malicious. The other young Angel Dragons stayed away from her, and she was more than happy, she didn't want their scorn and teasing. But one day, Agatha met a beautiful young Palomino Angel Dragoness named Seraphine. Seraphine tore her way through Agatha's barriers around her desolate heart and quickly became Agatha's only friend. Before Agatha could realize what was happening she fell in love with beautiful Seraphine. Horrified and ashamed, Agatha avoided Seraphine and all the other young Angel Dragons for a whole month. When she finally deemed it safe enough to return, she was intercepted by Seraphine's young lover, Sammael. Sammael was pissed off, because he thought Agatha had returned to steal Seraphine from him. So he snatched her, chopped off her tail, and left her to die. Seraphine found Agatha, bleeding out onto the clouds, and cried over her dying friend. Seraphine's tears contained enough power to drive Agatha's spirit from her dying body. Before Seraphine's eyes floated a ghastly version of her dead friend. Her fur was inky black, with skeletal markings glowing white against the dark. Her white eyes glowed, and in place of her missing tail, was a tail made of bone. The last words Agatha said to Seraphine was the name of her killer before she was outcast from the purity of Quetzal Palace and sent to Dragonsmaw Manor, where she lurks, watching and waiting for Sammael to show his disgraceful face and challenge her to a final showdown to set her spirit free.