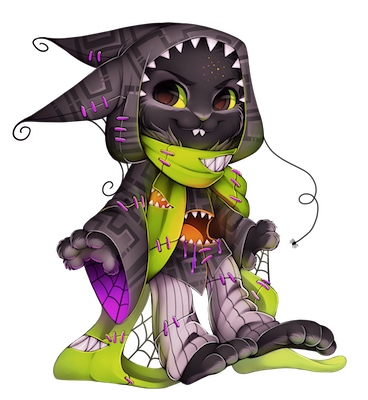 Dark and broody, Gizmo is the best Doctor in town. He often submerges in his work, letting himself get carried away in research to help his fellow townspeople. He may not talk much, but one can tell that he really pours his heart and soul into his medicine. He thinks only of the benefits to be given to the people he treats. He loves to see the smiles on their faces when he tells them they will be alright. Even if he is moody and prefers to stay away from social activities, he is often found out in the wilds; picking flowers, feeding stray animals, admiring the beauty of nature. One would think he has a gentle side to him. He did love to watch the way nature took care of itself. He took it as inspiration for his own life. Strangely, Alder was every so often found trailing after Gizmo when he was strolling along, enjoying nature. One could see him teaching the younger one a few things about the various plants seen.

Gizmo was never the one to show this side to anyone who was not extremely close to him. He disliked showing weakness, thinking it would make him vulnerable to pain and suffering as he saw happened biologically. Perhaps not the best of conclusions, but it was sure that Gizmo was a pure mystery inside and an open book on the outside. Also, he always seemed to stay far away from anything sour and habitually favored sweeter things. Maybe he had a sweet tooth?

─━━━━━ ⋅⋆⋅ ━━━━━─
Gizmo was always an odd bunny. He was quiet and reserved, never speaking out too much in school or college, never putting himself into anything extra outside of his medicinal ambitions and career. Henceforth, a lot of roumors circulate around about the dark doctor. Some say he was abused, some say he tested his practices on his family. They were all false, of course, but he would never explicitly say this. He simply let roumors be roumors, and treated those who needed treating.

The truth will stay with Gizmo, until someone opens up his heart to them.
Unless you're the author of course. ;)

Gizmo's father was in fact a doctor himself, and his mother a nurse. However when a terrible strain of ferality spread rapidly through the land, his parents were nearly the first to catch it, treating the ones with the disease. They kept working through it however, and eventually they almost cured every single case of ferality there was. But their own, of course.

Eventually, Gizmo's parents suffered from the disease. But not before they could teach Gizmo everything they knew so he could continue their legacy. And, to this day, he does just that.