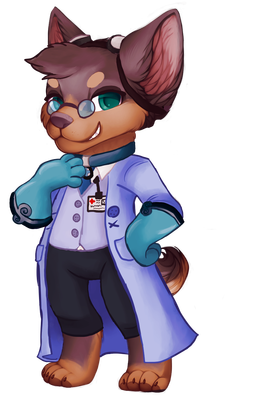 "Why, hello there~ You're just in time for your appointment! What? You didn't schedule one? Nonsense! You can come right in! Sit on down~ What are those straps for? My-- err, your safety, of course~ Now stay still, that appendix needs to come out."

Dietricha (pronounced Dee-treesh-uh), known as Di for short, is an odd character. She's a bit socially awkward and introverted, but does her best to sociable, as to not appear cold and unemotional. She insists she's not shy, but she just likes her alone time to study and work. She tends to obsess over medicine and science-related things to the point where it's scary. However, she can't really help it, having an almost vault-like memory and endlessly studying since she was 5. Yes, she was reading medical books when she was a pup. And, was an ace at Science. However, no one can really tell if she's actually an intelligent prodigy or she's just REALLY good at remembering things. This tends to get in the way of her interactions with others. She'll converse about things that aren't exactly "appropriate" at inappropriate times and they can range from being strange/scary to extremely gross/TMI (Di, you don't talk about why dogs scoot their butts on the floor IN FRONT OF EVERYONE WHILE THEY'RE EATING). But, not only does she have a strong stomach, but nothing really fazes her period. Her calm demeanor during even the most gruesome things is unsettling.

Though she's usually calm, she can get VERY aggressive quickly if she's trig-- err, pissed off. Especially if someone implies that all Dobermans are vicious killing machines or villainous devils/henchmen. Which is ironic, because she will beat the snot out of anyone for saying it.
...but, then again, hearing that you can't be trusted by anyone because you might snap at any moment for YEARS would make anyone rage. Most of the time, she's usually calm and sarcastic.

Di has an odd relationship with Sonja. She loves and protects her, yet... she really likes teasing her, because she knows how nervous she is and tends to test the potency and/or effectiveness of her medicines on her among other things. Somehow, Sonja always survives them, either proving Di's really good at her job or Sonja's invincible. She tends to refer to her as "kid", which makes Sonja annoyed, since she's an adult (it's possibly due to her high-pitched voice and naive, kitten-like behavior) and feels it's demeaning and unnecessary, as Di's only 9 years older than her, but after awhile accepting it as an affectionate nickname. Di often takes advantage of her, knowing that she's oblivious to her intentions at times, but doesn't usually do it out of malice, but because she has to. Other times, she can be quite caring to her. Even though her behavior can alarming the nervous feline (like when she calls her by her name in an all-too-nice tone or her snapping from talking normally to maniacal laughter (CUE LIGHTNING!) back to talking again), she still takes the time to visit her and genuinely has fun with her! ♡

Even though she looks bad and has a toothy smile both a shark and alligator would be jealous of, she means well and loves doing her job. However, she be overeager in doing it and may make a reason to have someone as a patient... Just... never cough around her. Try to keep it down. She may think your tonsils need to come out. ...I learned that the hard way... *rubs throat* Again, she's really nice! Just... ow. Oh no, I said "ow"... RUN!

Di is a Plum Doberman (but, technically an American and European Doberman mix) (No, she's not made of or tastes like plums, She's just a pale purple and that's where the name comes from. The coloration is extremely rare. Her twin sister Teal also has this coloring.) She is a pale purple (plum) and pale brown (rust). She wears a pair of pince-nez (earpiece-less glasses) that have a strong prescription BECAUSE SHE IS FREAKING BLIND WITHOUT THEM. Her eyelids are usually half-closed, with her bright, beautiful, emerald-colored eyes peeking out from under them, piercing you, making you feel uncomfortable, but... they're kinda seducing at the same time... (I got a thing for girls with glasses, okay?!) Her favorite color is blue, so she typically wears blue things. And, ONLY blue things. She in particular usually wears a blue lab coat with a missing button (for aesthetic reasons, she refuses to repair it), a light blue waistcoat over a white shirt, a pair of indiscriminate blue pants (I call them "soft jeans", but I have literally no idea what they are... XD Maybe they're scrub pants?), goggles she oftens wears as more of an accessory than actual practical wear (and when she does... *shudders* ...I don't want to talk about it...), and these really decorative gloves??? Like, where did she get them from??? If I remember correctly, she told me they don't sell them anymore, so she stocked up ahead of time. Icons and Art by Floatzel !

I want to thank everyone who was kind enough to draw my baby! You all are the GREATEST! ♡♡♡

PAGE UNDER CONSTRUCTION!! NOT FINAL DESIGN!!