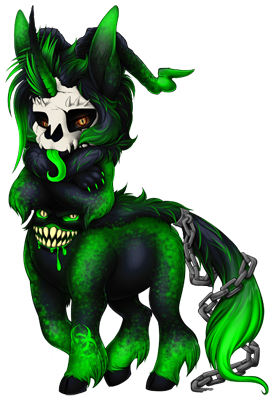 Grave is infected with Vampirism. Symptoms include craving blood, sensitivity to sunlight, an allergy to garlic, and changing into a bat after especially forceful sneezes. If they start to sparkle, immediately consume a Golden Apple to cure the infection. He's a military experiment, meant to be a kind of biological, artificially created weapon. But, things went horribly wrong... The creators lost control of the process, and he mutated wildly. He used to be a large black draft horse. Bombarded with mutagens, strains of DNA from other creatures introduced and mixed with his own, changed him. All the other animals genes, retained bits and pieces of their souls. Eventually, so many parts were minced into him, that those tiny bits of souls all merged into one, forcing a 2nd new soul be born within him. This new soul, spawned a second will, and thus a second face came forth, forming on his chest. His saliva, from either mouth, is a highly destructive kind of sulfuric acid. The fur from his face has completely fallen away, leaving only a bone-like spiked plating covering the whole of his head, except for his bottom jaw.

Grave...doesn't know what he is anymore. All he knows is that he's angry. And he's hungry. Hungry for a lot of different things, all at once. Hungry for blood, hungry for revenge, hungry for dominance over anyone that even so much as looks at him wrong. He has berserker tendencies when the more primal, second soul takes over, and during these periods he's all but unstoppable. But when he is in proper control, Grave is actually highly intelligent. Regardless of who's in control at the time, he is not one to take lightly not getting what he wants, be it food, violence, or mating. If he wants it, he will have it. Somehow.