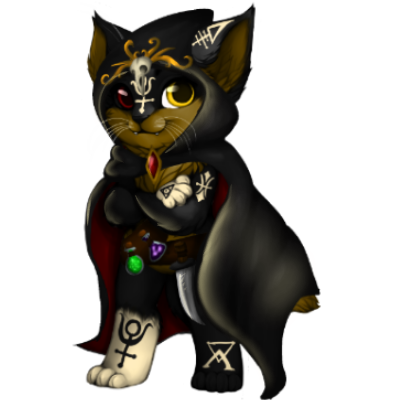 Alastor Calloway is an experienced alchemist with a with an unfortunate and slightly sociopathic inclination toward strangers. Due to this, he doesn't have many friends and those he does have are as or more twisted as he is. Though his home is Olde Foxbury, living way on the outskirts, he relates more to the residents of DragonsMaw Manor, and does much of his business there.
He is a mostly black cat, with darker gold covering his bottom muzzle, chest, belly, and tail tip. He has cream markings up the elbow on his left back and front paws, and is marked with cream and black coloured alchemy symbols. He wears most often of times a long black cloak with a blood red inside, the hood decorated with gold designs and a birds skull. His cloak is lined with inside pockets, filled with potions, powders, and artifacts, as well as an array of bottles and knives on a belt. His red eye can see spirits.
Alastor is incredibly feared, but with this comes much respect. He likes darkness, where he can blend in and dislikes daytime. He is a danger if ever run into alone, or at night, as due to his sociopathic personality he often lures unknown villagers into the forest and kills them, later experimenting with what he doesn't eat. His home is in the heart of a dark forest spacing the distance between Olde Foxbury and DragonsMaw Manor, and he experiments in a large clearing surrounded by tall dead trees and rocks.