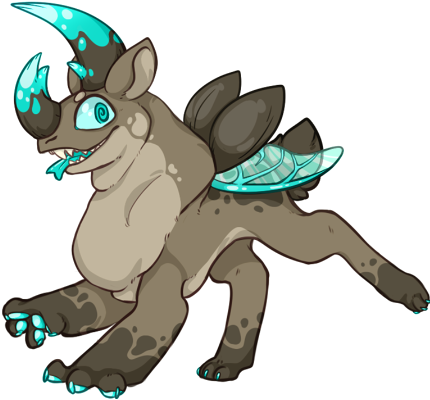 This small, beetle-like droogin loves rough housing and playing in the mud! It not only adds more color to his brown hide, but mud that manages to dry makes him twice or even three times his weight! This makes it harder for others to flip Elroy over during fights for territory or mates.

Elroy's hide is various shades of brown that appear lighter more towards his belly and darker at the ends of his limbs. His pawpads, nails, and horns are a bright striking blue which are often covered up by his armor. Scratching tree bark and digging often remove some of the mud, allowing you to see small bits of their natural color.

Elroy is very excitable and though he can come off as brash at times, he's extremely affectionate to those who treat him nicely. He can be cautious of other males but as long as they aren't coming to take his stuff, then yay! New playmate! Open for Breeding
Terms of breeding:
Please PM and ask first.
Depending on how interested I am, we can share the cost.
If i'm not that interested you'll have to pay the full breeding cost but you get all the offspring!
Droogin Registry / Droogin Adoption
Droogin species belong to Violetpool / Droogin base edits, coloring, and shading by me