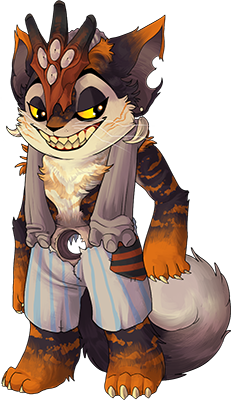 Krankie is infected with Zombipathy. Eating brains relieves symptoms for a time, but comes with memories of the brain's former life. Your doctor recommends adding hot sauce for extra flavor, but a Golden Apple a day will send the Zombipathy away.

Krankie, or... 'Dr. Krank' occasionally, is an eccentric alchemist who likes shoving seemingly random things together and seeing what happens. He isn't exactly ethical in his testing methods, subjecting other members of the caravan to his bizarre concoctions - you'll learn quickly not to accept a morning cup of coffee from Krankie. There's a degree of method to his madness, however, in his ravenous search to create the best library of potions in the land he'll accept no limitation to his studies.

He's also a talented tailor, though his sense in fashion may lead you to believe otherwise. He finds making clothes a relaxing break from making potions or exploring, and made his own garment from a trophy graciously donated by his hunting friend, Helenka. 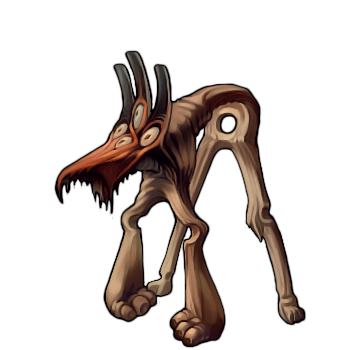 Krankie was orphaned at birth in a gloomy, swampy outpost close to Dragonsmaw Manor. He had a different name back then, but he can't remember what that was.
Being raised in a cramped orphanage, the young kitten was depraved of the love and attention crucial to a developing mind. Combined with his naturally loud personality, this made for a really troublesome youngster who loved to cause a fuss. He would constantly act out, pull pranks and run away without much of a thought for the negative consequences. As a child, this was a pretty reliable way of getting attention, but as adolescence crept in? Adults had far less sympathy and no longer wanted to chase after him.

As a homeless teenager, Krankie felt no need to stay in a village where he had a bad reputation for stealing and vandalism. He was going to become far bigger than this sorry place! He'd go out and discover uncharted lands, travel from the highest point of Tiger's Eye Peak to the lowest ditch of Oceandome. However, not long after setting out on the road without proper supplies, the naive young cat quickly got lost.
Alone, afraid and extremely vulnerable, Krankie kept on the move - too scared to think about food or sleep until his own body protested his ill choices. The creatures that resided here forced him to hide in tangling bracken and underbrush if he wanted to survive. The only food he could find after his own was used up were terrible berries that sometimes grew there, and the only bed that could provide comfort was damp moss. If he could only find a house - a cave - something to keep him safe from the threat of monsters. Every growl, snap and whistle pushed his exhausted body in a different direction, until he felt the grip of his weariness pull him to the ground once again. A breeze pestered his ear. This wasn't the natural ambiance he had become accustomed to out here - this was... music? Fighting the urge to sleep for the night, he pulled himself out of the dirt and followed the sounds to be greeted with distant lights. Not wanting to become food for a Mouth Beast, he gathered his tiny amount of remaining strength and pushed onwards.

As he edged closer, the bright lights and sweet smell of food blessed his senses - it was unmistakable. This was a Carnival! He'd heard stories of them popping up around the place, oh what lives they must live, always travelling... just what he wanted to do! ... But on that very thought, the cat hit the ground again, this time with the distinct pain of piercing teeth penetrating his hide. With such little energy, it was impossible for him to fight back. The large brown beast had its day, and he could do nothing but watch it as his vision faded...

Krankie woke up in a trailer, not remembering anything of who he was or where he came from. "Are you alright, Krank?" Asked a small fox in a sweet tone. Krank? He looked around - sure enough, she was referring to him. She went on to explain that he had an accident whilst fixing one of the rides - one which left him with an ominous hole in his torso. Not to worry about that, of course. Her magic was so advanced that she could heal him before the injury grew fatal! He'd just have to keep working here until the hole was totally closed, and no longer a danger to his life. Having nothing else to go by, no ID, documents or possessions - he didn't have much of a choice but to believe her explanation.

For many of the following years, he was made to do maintenance work, fix and make costumes for performers and man stalls. As time went on, he seemed to recall memories of working at the carnival that corresponded to what the fox had told him. He remembered his workmates and greeted them like old friends. It did seem that the carnival was very accident prone though, as many of the other workers claimed to have some serious internal injury that the fox was healing too. Some even had injuries like him - or twisted faces and forms, that over time had never seemed to get better. This was obviously extremely suspicious, but it's not like he had much of a choice. If he left here, the magic would wear out, and he'd be as good as dead. They were all being held here with the most extreme form of blackmail - and what's to say these wounds would ever close?

Work. Work. Years of work. Work for your life. The carnival music that repeated, on and on, those cheery organ tones grew so tired over time, so repetitive, taunting. More and more employees injured as the years dragged on - why didn't anyone ever think to warn them to leave while they still could? His patience was thinner than the rags he sewed. All these idiots might have been happy to remain there, but not Krankie. What was life if he was going to be cursed into serving this shady carnival for the rest of his days? It was time to make his stance crystal clear to that sweet, manipulative fox.
She was taken by surprise by his sharp accusations. In fact, he started to feel a little bad, After all, with the baby on the way and two years of loving engagement he-- hang on a second. There was a light coming from her hands behind her back! She was using magic to mess with his mind! Sickened and angered by all of the implications that held, he pushed her to the ground, disrupting the spell.
"Is that it, yeah? All my memories - are they false? Who AM I, what have ya done to me!?"
Desperately scrabbling away, the meek supposed healer barked her argument, "So what? So what if it's like that? Wouldn't you rather live a happy life, full of happy memories here? Why, with a flick of my tail you could have had the most exciting, beautiful memories - wouldn't you be happier that way?"
Krankie snarled, "And what would I do with that, then? Waste it here forever in your stinkin' worthless carnival?"
She paused... and a crooked smile crept onto her face, "It'll hurt. As it wears off, it'll hurt. You'll feel the pain come back, slowly, Creeping and twisting you inwards. You can't live with part of your intestine missing, and you'll feel every second your body starts to realise that."
Another stark pause between them both. It was clear that nothing sincere could come from her mouth - as even in her seemingly sadistic grin, there was a mark of dishonesty. Desperation. As Krankie was left contemplating, she got to her feet and fled, her distraction had worked. There and then he had to decide, would he leave and face the possibility of a slow, painful death? Or would he stay here in fear like the others, forever working at this awful carnival.

No. If he was going to die, at least he'd die free. Krankie bolted toward the exit, not knowing how much time it would take for her to rewrite his memories again. But he didn't feel the onset like he did before - nothing new, nothing conflicting. Before he could question it, his feet had taken him out, deep into the wilderness. He looked back to the direction of the carnival... no, she wasn't there. Nobody was chasing him. He looked to the hole in his body, perhaps this was a mistake. He wasn't a main act, or anyone important after all - the warning of the pain, was it just that? A final warning?

A snap from the forest clearing got his attention immediately - he looked up. It wasn't a person. It was a monster. Four eyes, a red face, horrid spindly limbs. All it did was stare - somewhere in its blank eyes was a sense of familiarity. It wouldn't attack, it, almost seemed to sense something in common between them. He then noticed the hole in the creature's own body, like a sick kindred spirit. Somehow, as far and as long as he would decide to run, he knew he'd never truly be free.

Paintie done by me, cat base was used.
Design inspired by on-site "Smiling Kritty" and "Noxious".
Free-to-use photos in CSS sourced from Pexels, no license required.