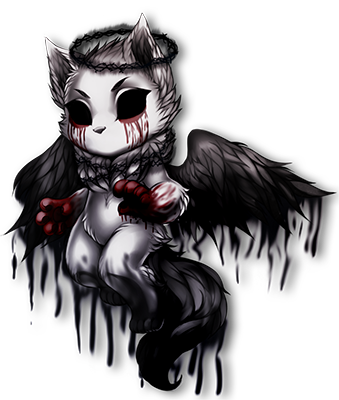 Sarah no longer has a house! They will be unable to work. Please replace the house or move Sarah into a FC slot.

Sarah was always... troubled. Born physically weak (And not particularly mentally sound), she always had trouble dealing with those who didn't treat her with care. She buried herself in books on magic and power, however she wasn't strong enough to travel far.
After making some inquiries, she stumbled upon a book containing a ritual. A summoning ritual to be precise...

She summoned an often shunned deity, and made a deal. She would become strong, stronger than even the most powerful warriors. In return, she would become this deity's vessel for 11 years...

Everyone is nervous around her nowadays. It's obvious that over a decade of being a vessel had caused even more damage to her mind, but nobody says anything. Nobody mentions how her pure white fur has been burned, her dismissal of other's feelings, or the strange, black wings that sprouted from her back.

Sarah doesn't care about them. None of them will ever hurt her, again. That's all that really matters, isn't it?