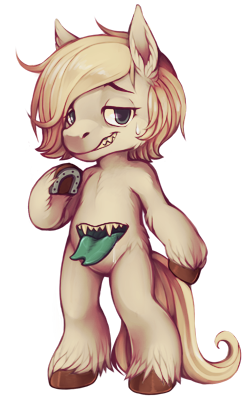 ~~~
Shaun used to be a regular horse until he had a rather unfortunate run-in with a band of demons. He's been cursed ever since.
~~~

Your visit to this particular district of Dragonsmaw Manor has been generally a pleasant one, but as the day reaches the cusp of darkness, you can't help but feel like your walk down the streets are being watched. The quirky locals begin to thin out, their raucous laughter between one another slowly fading to a distant murmur as everyone heads back to their own districts and homes. Finally, you turn to do the same, or perhaps seek out an inn of some sort, when finally you are met with the tired, almost starving eyes of a rather odd horse.

He appears rather sickly, you notice, with a queasy grin plastered to his face. He's rather gorgeous aside from his otherwise disheveled appearance, though there's something.. off about him. Aside from the strange toothed mouth on his belly, but at this point, you're convinced you've seen much weirder denizens of this village. He asks if you're lost, and you assure him you aren't. You exchange a few words, maybe asking him where the nearest inn is located. He tells you he can show you the way and begins to lead you off somewhere. As you follow the soft-spoken critter, you try to figure out just what it was about this guy that wierded you out so much. And then you remembered his grin, and that hungry look in his eyes.

---
I was gonna make this villager a completely different OC but oops, got bored of that idea...