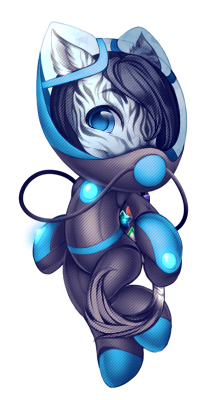 | Bio |
His real name is Argus but has been called Stickers for as long as he can remember. He originally hailed from Olde Foxbury and lived there for a while but had moved up to Quetzal Palace from the fascination of being able to fly. After all who wouldn't be even a tad bit curious of flying when you lack the wings or ability to?
Upon moving to the Palace, he's worked as a Warrior as a means to earn cash so that he may one day be able to soar the endless sky.
...
And he finally did. After earning enough cash, he bought a diver suit and had his good friend Roger refurbish it into a space suit. He's still getting it fixed up by his friend, who tends to add different components to make it more interesting to use. Stickers still isn't sure how he feels about it but doesn't argue with him. After all upgrades are cool as long as it doesn't get him killed.

| Personality |
A rather honest fellow but it makes him seem rude at times since he is quite blunt when he speaks out his thoughts. Often others like to call him childish since he retains his old nickname from his youth and has dreams so big it can be deemed impossible, however he likes to think of his ways more optimistic and that his dreams are more probable then others declare them so. He can be rather trusting of others but this leaves him open to deception.

[Gravity Hold] - "I have no clue how this works but I can fall upwards when I turn it on and when I turn it off, I fall back to the ground. I have to be careful though, I may not come back down if it breaks. At least that's what Roger tells me, when I want to try it outside."

[Laser Saber] - "Roger thought it'd be a cool idea if I can use weapons easier with my suit. I couldn't agree more! I always had to strap them to my hooves before but now I can have a plasma like blade coming from the light near the end of my fore hooves. It's pretty neat. It bugs out a lot after a while though and I am always going back to Roger to fix it up."

[Beam Buffer] - "I personally requested this. I was tired of getting knocked around so he fixed up a plasma equivalent of a shield. It does it's job but like the blade, I have to get it fixed every so often."