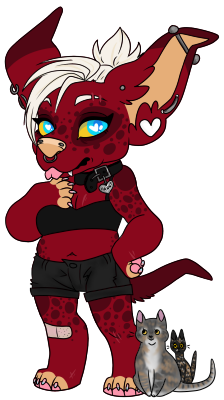 Hannibal is all bark and definite bite. She's grumpy, foul tempered, and really doesn't give two hoots about most people. Around people she likes, which are far and few between, she's silly and sarcastic, although she goes from goofy to snarling in .2 seconds flat. Hannibal can and will hold a grudge until the end of time, and will likely come back to haunt people she hated once she dies. She'll fight anyone for anything, and isn't afraid to get into peoples faces.
Despite her large ears, she's actually hard of hearing, and has word salad, so don't be surprised if she asks you to repeat yourself a couple times. She also suffers from bipolar disorder and social anxiety, with sensory issues to boot. Nugget (or Nuggeroni) is a fat terrible ball of energy who enjoys destroying things Hannibal loves, shitting on the bath mat, biting people, sleeping on your clean clothes, and attacking peoples achilles tendon. When she's not on the war path, she's incredibly sweet and snuggly, and loves to sleep under the covers with her people. She can never figure out how she feels about TK; sometimes they snuggle, sometimes she hisses.

TK (Tiny Kat) is a tiny terrified gremlin that is pretty much the embodiment of anxiety. Part of her so desperately wants pets and attention, but the majority of her is scared of everything that moves. She's absolutely enamored with Nugget and won't leave her alone, and only trusts Hannibal. She enjoys hiding, screaming about food, falling off things, yelling about bugs, and catnip mice.