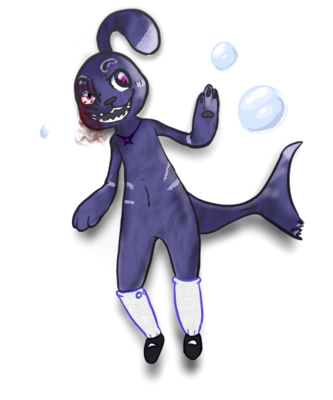 tiviV noN no longer has a house! They will be unable to work. Please replace the house or move tiviV noN into a FC slot.

Today, I'm actually really excited. Our group (even Dave!) has decided to create the first cross-species.. That was entirely selected at random.
Of course, it's going to take a while. We're thinking around 15+ years, minimum. The two species we're mixing are a rabbit, and a shark. It doesn't seem as impossible as we think, or at least that's what the manager says. I kinda like Roberts, but he can be rather strict.

We did it. After 108 long, tiring days, we finally impregnated a shark egg with rabbit's sperm. I.. Honestly don't know what else to say. This was impossible, by nature. It still feels like we failed. Guess I've become numb to injecting stuff into shark eggs.

... Something's not right. The child (we nicknamed her Lilly for the moment) isn't speaking. She just sits there, watching us. Not in the creepy way, but more in a curious "I'd-like-to-join" way. Not only that, but Lilly's arms... They're unnatural. Thin and then they grow fatter at the end, where the appendages are. Best to be careful.

My hunch was suspected; one of the medium sized lamps fell on Lilly and crushed her left ear. She yelped in pain, but that was it.

She licked up the pouring blood off of the floor as the others tried to bandage her ear up..

The bandage is gone and so is what was left of Lilly's ear. And I don't mean the ear is gone, I mean it's smooth, like it never was there in the first place. We're looking into this further, including why she is so fragile.

Some sh[REDACTED] went down. Lilly scratched her eye and started to lick up the blood like it was no big deal. She didn't seem to react to the pain because the scratches turned into cuts, and then those cuts turned into gashes that you could see her red-tinted skull through.

Patching her up, and removing her claws and the ability for those claws to grow back.

she ate ming. she ate ming and i see the blood on the glass case. everybodys screaming. lillys still chewing on her bones but only sucking up the blood
she looked at me. she smiled in the most calm way like nothing was wrong

she got a papercut inside lillys area

lilly pounced on her

and now shes looking at me


the lights are out

To anyone whomever finds this note.

Do not go into this building. If my plan succeeded, then you should find this on the front entrance, hopefully boarded up. A failed experiment is locked away down there, alive and still growing. Listen, before your curiosity grows, it eats whatever has blood flowing in it. For the love of Christ, do not go into this building. Do not go in.
If anybody speaks of Oceandome Underground Study System, tell them that it does not exist.

where is theodure? he scream and ran