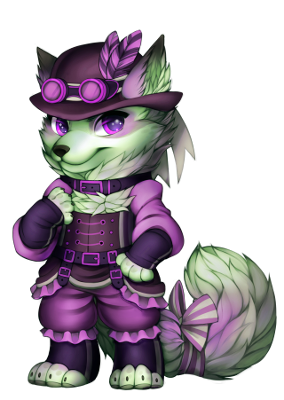 Caysey is infected with Vampirism. Symptoms include craving blood, sensitivity to sunlight, an allergy to garlic, and changing into a bat after especially forceful sneezes. If they start to sparkle, immediately consume a Golden Apple to cure the infection.

Caysey is a native to Quetzal Palace, but her imagination and creations go far beyond the village's borders. Never able to sit around doing nothing, she often got in trouble as a kid; when she wasn't drawing on most available surfaces she was sneaking out of the village or coming up with crazy inventions that severely backfired upon testing (such as magical umbrellas to make one fly). One such experiment ended with her breaking a leg and while she could not leave the house, her mother finally got her to pick up a needle.

Designing and tailoring is probably the only time the vixen can stay in the same room for hours (even days), but even then she's often flitting around the space, changing sitting positions and simply viewing the creations from every possible angle.

Rest of the time, Caysey is going out, exploring, and diving into the busy life of Quetzal and seeking out travellers to gain inspiration for new designs. Gyda is one of her closest friends, having treated fox's injuries far too often and often being the one to remind about meals. Now that Caysey has met Clemensa, she pesters wickerbeast for stories of other villages and lands. Her clumsy sketches was what gave idea young tailor for her most recent outfit, with a touch of darker Quetzal color theme.

Another good friend of Caysay is who Kaira holds notebooks and craft tools for her,as well as any treasure the fox finds on her adventures.