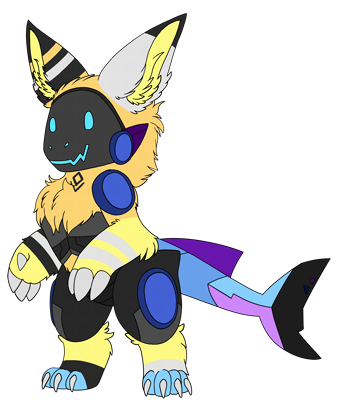 Tags: sona protogen lstheninjakitten this is my taco-loving son and i will protecc him at all costs

Anaris is a fluffy goofball of a common Protogen who is really only a threat to those who bring harm to his friends. He tends to headbutt people in greeting. Nobody knows why, but nobody has asked him either.

This is my blep son and he's a fluffy derp.

He will steal your taco with no mercy.

Has a love-hate relationship with LightningStrike
As seen here:

Personallity-wise, he's a big ol' social softie who sometimes comes off as an attention hog due to his outgoing nature, but means well at heart.
When communicated with in-character, Anaris will try to do the same!