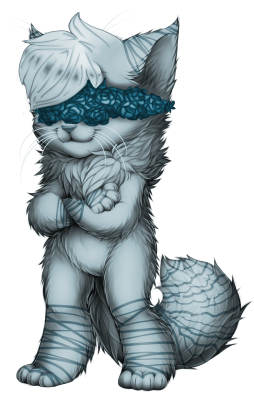 
story:
Ao and his sister, Rosaline, had been born into a small but happy family. Their mother, Eveline, was very ill, but she took care of them to the best of her ability. Even as young children, the pair understood that they didn't have much time left with their mother, and tried to make the happiest memories before her life ran out.
Their mother died fitfully in her sleep, next to her children. After that, their father, Storm, fell into a great depression, and Rosaline was convinced that he wasn't fit to take care of them anymore. She took their care into her own paws, hunting and making sure they were doing well.
Finally, Ao suggested to leave their father once and for all. Rosaline was closer to their father more than Ao was, and was hesitant. Despite their father's current state, she didn't believe that leaving him was right.
One day, their father suddenly snapped and lashed out at Ao.
"_It was all your fault! You blind, useless child of mine. You can't do anything by yourself!" Storm had spat. "_You're the reason Eveline is dead!"
Storm raised his claws, about to land a killing blow on Ao, who was frozen with shock and fear, when Rosaline sped in front of their Father. Storm's claws landed on Rosaline instead, and she fell, bleeding.
"_R-run.._" She choked out, staring at Ao pleadingly. Her body had went limp.
Storm let out a yowl of fury, bounding after Ao, who had started to run.
After what seemed liked ages, Storm finally gave up. Ao knew that he could never go back. He mourned for his sister, and his sore paws dragged against the earth as he had searched for shelter blindly.
Days passed before he was hit with a pleasant smell. He felt soft ground underneath his paws and started to fall forwards, exhausted. Ao heard pawsteps heading towards him, but was too tired to care, and fell into a dark slumber.
Once he woke up, he felt a presence over him. It was someone who called herself Blaze. She didn't realized he was blind until a little later, and described herself as a gold+yellow cat with fiery colored ram like horns and a flame at the end of her tail.
She told Ao that he was in the field of the lost, and that it was a massive blue rose field, each rose representing something someone had lost. Apparently, no one could come unless they truly needed to find something they lost, but couldn't remember what.
This confused Ao. He wasn't sure he had lost anything too important, besides his family. But he could still remember his family.
"_It's obvious you wouldn't remember_" Blaze's eyes danced with flames, ones that even Ao could see. "_That's why you're here. To recover something you never knew you lost._"
Before Ao could ask how she knew, she abruptly changed the topic. She had made a rose crown out of the roses around them, during their short conversation. She told her that it was for him. Ao was warmed by this action, and Blaze placed it on his head.
The rose crown was too big and almost instantly fell down in front of his eyes, and Blaze was embarrassed. She insisted that she make him a new one, but Ao refused. He honestly liked the rose crown, as it hid is unseeing eyes.
Time passed, and with only each other’s company, they grew closer. Ao realized that he had developed feelings for Blaze. But Blaze was also growing more and more troubled as the time passed, unable to remember what she had lost. Ao worried for Blaze, and combined with him not being able to forget his father’s rejection, his sadness grew to such a level that he couldn’t contain it all.
Unbeknownst to him, he raised a monster created by his sadness, until eventually, it tried consume him entirely. Blaze sacrificed herself in order to save Ao and destroy the monster.


I can’t write in this point of view anymore rip, it’s gonna change from here


Blaze’s eyes glowed with a fiery light as she laid in a pool of her blood. The monster broke into a million dark flames and disappeared into the wind besides her.
“B-blaze?” Ao whispered, feeling the blood creeping up on his paws. He crept down to Blaze shakily. “Are… you okay? I feel blood. That’s the monster’s blood, right? You’re just laying down because you’re tired? Yeah, that must be it.”
Blaze laughed lightly, before breaking into a fit of bloody coughing. “Ao, we both know what’s going on. Don’t lie to yourself.”
Ao struggled to hold back his tears. “I’m not… You can’t…” His tears finally came, and he nuzzled Blaze’s ragged fur. “T-this was all my fault, I’m so sorry”
Blaze held a weak paw against his chest. “You can’t blame yourself. Don’t blame yourself. In fact, I should be thanking you.”
Ao froze. “What?”
“I remembered what I lost” For the first time ever, Blaze was crying. “I lost my courage, so long ago. Thank you so much for helping me remember, Ao. I couldn’t be more grateful.” Her breathing became more weaker and shorter.
Ao shook his head. “N-no, Blaze, don’t thank me! I… I need you alive… How will I continue?”
Blaze let out a final, shaky breath. “You know how..”
Ao heard a terrible wailing sound, before realizing that the sound was coming from him. He let out another dark, writhing monster, a different one that had no form, but was just as terrible.
Ao felt an emptiness settle in his chest. The beautiful blue rose field faded away, taking Blaze’s body with it.
“I remember what I lost too, Blaze.” Ao whispered. “I lost my happiness.”
Ao got up, and walked away, Blaze’s blood drying on his fur. “Except I didn’t get it back.”


====
From that point on, Ao wandered the world beyond his memories, pretending to be happy in front of other people. His fake happiness also was given a life and form, a black and bright green Lynx. He named her Venom, because fake happiness made him feel like his heart his heart was being drenched in venom. Ao and Venom are essentially the same beings.
Song: Anxiety (I just want to be calm) by Chris Ray Gun