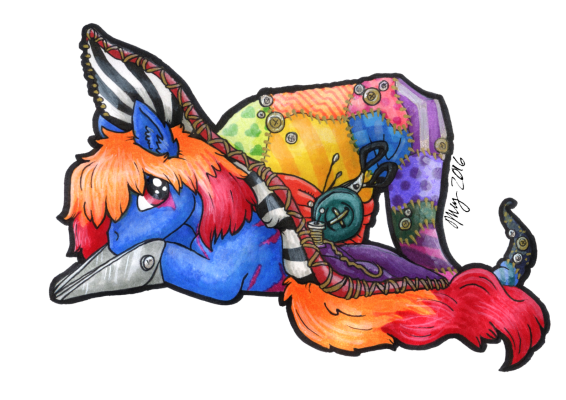 
FOR THOSE WHO DO NOT WISH TO READ THE SHORT STORY THERE IS A SUMMARY AT THE BOTTOM.


As you wander over into the clouded village, you notice a glint, from something shiny, as you walk closer, you notice a blue mare standing there, and you believe to see her holding something sharp. Though upon further inspection, you notice she does not have a lower half to her arm, instead there's something metal that protrudes from it, you take a step back, uncertain about this discovery, but end up stumbling over your own feet, and landing on the soft clouds, a soft 'puff' could be heard as you land.
The mares ears twitch at the sound and she turns around, looking around the surrounding area for a second, before her gaze lands on you; you feel your heart stop beating for a moment, for fear of what might happen, she takes a few steps towards you, and frozen in fear you couldn't think, couldn't move, you just couldn't get away. As the mare gets closer, you notice her legs are the same as her arms, the sharp metal perturbing from them.

You noticed the mare walked quickly and delicately, though, if she stepped wrong the metal pieces on her legs would spread apart, like scissors, and she's have to stop to regain her balance.

As she drew closer, you felt the tingle of dread bubbling in the pit of your stomach; and soon she was standing right in front of you, you thought that this was the end, but instead, she put out one of her scissor like hands, and gave you a very kind and friendly smile.

"You okay?" The strange mare asked, her voice soft and sweet.

You placed your (Name Of Hand/Paw/Tentacle/ETC.) on the flat side of her scissors, and she pulled you up off the ground, You looked at her up and down, and ask you opened your mouth to ask a question, she cut you off, as she already knew what you were going to ask.

"Yes these are scissors, no they are not prosthetic, yes I have scars, no they weren't from a fight, I got these from growing up, you know, It's kinda hard to scratch with scissors for hands and feet." She informed you, ending with a chuckle.

You introduced yourself to her, and she did the same, she told you her name was 'Snipets' and that she explained that she was a bred of horse called a tool pony (Closed Species Mad By Me) that there were very few of her kind and that they couldn't get cutie marks. She then began to explain the scaring on her flanks were from when she was a filly, that she had intentionally cut them up trying to give herself something she could never earn. She seemed kind of sad talking about that subject, so she shook her head and invited you into her workshop to talk, and have lunch with her.
You agree and the the two of you head inside, spending the rest of the afternoon enjoying one anothers company.

(Summarized version: Horses name is Snipets, you meet her in Qutzel Palace, She is a Tool Pony (Close Species Made By ME) and she invites you into her workshop for lunch)