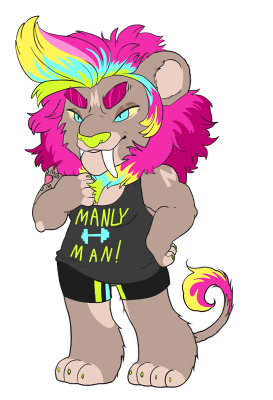 No-one knows how MANIME MCMAN (MASTER OF THE MANIVERSE) became THIS MANLY. There was no progress, no life story - he just APPEARED in the MANSION one day. BUFF AND FLEXING AT JUST TEN SECONDS OLD, HIS MANIFICENT ALL-NATURAL MANE COMMANDING THE WIND, MYSTERIOUS MAN MANIME MCMAN is seen in advertising for the MANSION almost as often as the BROKAGE, FLEX BICEPS.

As a self-proclaimed "BROAR", MANIME's species supposedly combines MODERN LION, MANCIENT TIGER, and THE VERY BEST COLOURS to create something ALMOST TOO MANLY FOR WORDS. Looking at him, it's hard to argue with the spiel - he is, indeed, TOO MANLY FOR WORDS. In fact, MANIME's bare chest is considered DANGEROUS LEVELS OF MANLINESS, and prolonged exposure has been known to cause INTENSE MUSTACHE GROWTH.

Being an influential figure in the MANSION - a celebruhty, even -MANIME has naturally had several books commissioned: A biography on himself, a cookbook, and the bestselling guide "HOW TO GYM". He regularly holds autographing events for these books - often in other villages, causing great bemusement when he arrives, pen in hand and a horde of MASCULINE MEN, MANGIRLING OVER HIM.

When not attending book signings or whipping his ALL NATURAL MAN-MANE back and forth, MANIME enjoys the GREATEST SPORT OF ALL TIME. In the LESS MANLY TIMES, this was known as "construction work", but MANIME SAW BROTENTIAL in all that HEAVY LIFTING and SWEATING. Donning a MANIFICENT MANGENTA HELMET, he joined the fray - and to this day, holds the SWOONING RECORD.

((Paintie and base are by Queenie!))