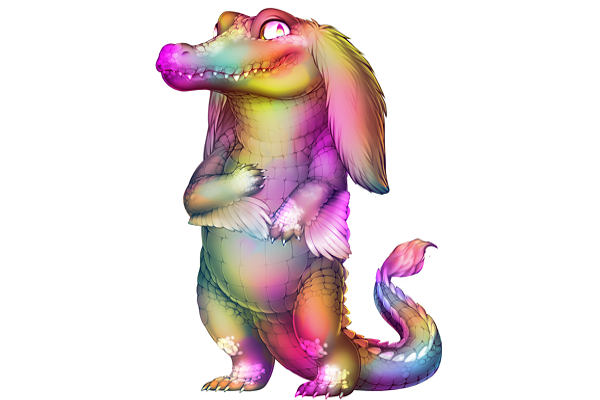 Entry 1:
B-1227 appeared wandering the facility. It is not known how it came to be, or where it escaped from. It has been given a cell.

Entry 2:
B-1227 appears to have problem solving intellect. It has solved several puzzles that higher primates normally have difficulty with.

Entry 3:
B-1227 seems to have people that it favors interacting with. So far it seems fine with me being in the cell with it. I have stopped tranquilizing it, as doing such makes it too groggy to preform tests.
However, B-1227 showed a great deal of hostility to my assistant. They will not solve or even pay attention to a puzzle while my assistant is in the room.

Entry 4: My assistant has opted out of the assignment after B-1227 bit them on the arm. However it could of been much worse, as it seemed B-1227 was lunging for their face and head, and my assistant raised their arm up in defense in the nick of time.
I remained behind in the room after prying B-1227 off my assistant. I had planed to run, as one would expect, however I was caught off guard. I could have sworn I heard it speak to me. Saying it was 'sorry'.

Entry 5: Though it was probably an ill decision, I went back into the cell with B-1227. It was sitting in the corner, looking ashamed, surprisingly enough. Once I had entered the room, it seemed to realize I was there. Its so strange. So impossible. But it spoke to me again. It asked if my assistant was okay or not. I told it that they were fine, which seemingly made B-1227 happy. I asked why they had attacked them in the first place. B-1227 refused to speak anymore.

Entry 6: B-1227 has refused to speak or interact in any form for over a week now. I'm considering closing the project.

Entry 7: B-1227 has begun speaking again. It told me something odd. It only said one thing to me today after I inquired about the attack. "They hurt me" I'm unaware of anything happening while off duty, I'll have to investigate this claim further.

Entry 8: After investigating and asking around for several days, I think it is safe to say that my now Ex-assistant was indeed harming B-1227 along with other B class subjects. They have been removed and prohibited from further working in the BWing.

Entry 9: B-1227 has expressed that they don't like being called by a code number, and would prefer a name. Several employees have already taken to calling it 'Sherbet' due to its mixture of bright coloring. Sherbet has also expressed that it is not an 'it' but a she/her. I can not confirm this oddly enough as the DNA testing has not shown a gender at all. However I will now refer to Sherbet with female pronouns.

Entry 10: It seems that I'm the only one that Sherbet has spoken too. She refuses to speak when someone else is in the room. She also seems to know when a camera is watching or a recording device is active. I'm not sure how this can be.

Entry 11: Sherbet has been unusually moody lately. She says that she heard that I'm going to be removed from the project. I haven't heard anything about this, but I'm worried. Sherbet also said as I was leaving that "If you don't come back I don't want anyone else to come here."

Entry 12: It is confirmed, I have been removed from the project and all my access has been revoked. I was not told the reason for this. I have submitted a request for reconsideration, but these things take time. Time we may not have.

Entry 13: I have overheard that Sherbet has jumped from a 2 to a 10 on the hazard charting system. I don't know what happened as it was spoken while passing in the hall. Apparently Sherbet has become too aggressive for anyone to enter the room. I'm trying to get my access back, I'm confident that this can be easily resolved if I'm allowed to speak with her.