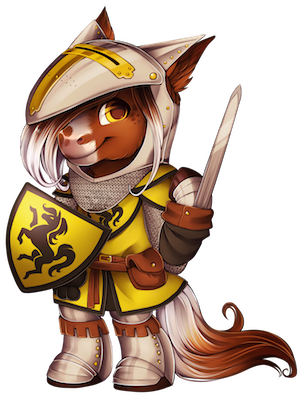 Became a horse to better emulate her idol, kind of a freak when it comes to fighting.

-Can be freakishly violent and really loves fighting, easily gets lost in the heat of battle
-Very stubborn, is VERY bad at giving things up and can be a bit obsessive
-Can become a bit of a dork when it comes to media and can get obsessed with shipping.
-Would probably slaughter a monster extra quickly so she could be home in time for her favorite TV shows
-Has a horse idol who is an accomplished warrior, drank a morphing potion to become a horse like her, sacrificing her red panda fingers. She misses those sometimes.
-Dating an Angelic Horse called Oisin. He's a bit of a drama queen.
-Distantly related to Enbarr