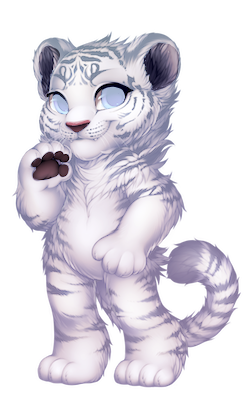 kytten is infected with Vampirism. Symptoms include craving blood, sensitivity to sunlight, an allergy to garlic, and changing into a bat after especially forceful sneezes. If they start to sparkle, immediately consume a Golden Apple to cure the infection.

Blind from birth, kytten always knew what was going on, even before the others in her home village knew. She had the unfortunate, and uncanny, ability to predict when the rains would come, or any misfortune would befall the people. In the beginning, the villagers praised her abilities, calling her a gift from the gods, using her foresight to prevent the calamities that came to her in her visions.

But over time, the younger villagers began to resent her. She was close to worshipped by the elders and the younger generation wanted that attention. They began conspiring in secret, planning to kill her. She, of course, foresaw this and decided that she should leave. So she stole away in the middle of the night, taking only what she could carry in her little pack, and took off on a grand adventure that eventually lead her to her current home, where she oversees the small village as the Seeress.