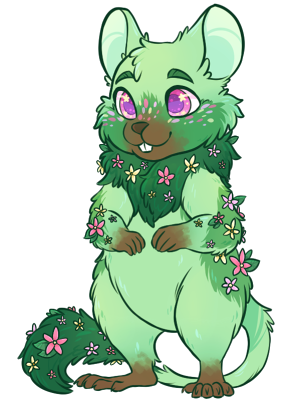 Dandelion is shy and timid around almost everything. Despite trying to see the best in everyone, he often feels like everyone is going to hurt him. Because of this meeting new people is often a huge stain on him, as it often takes him a while to fully trust that any given person isn't going to hurt him, either emotionally or physically. The years it does take Dandelion to build the trust needed to foster a true friendship are often riddled with anxiety and fear.

Not surprisingly, Dandelion is happiest alone, reading a book or watching the clouds go by. It is only then that he can believe that he isn't just a ball of anxiety and fluff. He often dreams he is a warrior that isn't afraid of anything or anyone. He stands up for the weak, who often end up resembling the Dandelion of reality.

Once you get past his wall of anxiety Dandelion is the sweetest mouse you will ever meet. He often picks the flowers that grow on him and give them to people he believes needs a little happiness in their lives, that is of course if he can work up the courage to approach anyone. His favorite is going to cemeteries and leaving flowers at random graves.

He unexpectedly has become close friends with Viro and Kit, though that is mostly because they have poked and prodded him for years. They pull him out of the dark hole Dandelion often finds himself in and are fiercely loyal to him. Although Dandelion doubts that loyalty almost daily. Even after years of friendship Dandelion half expects them to just get bored of him and leave. When in truth they see something great in Dandelion, something that he just can't see in himself.