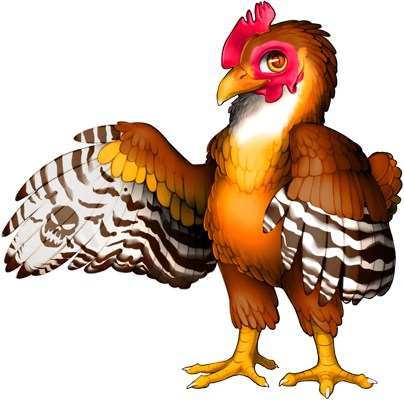 Candy no longer has a house! They will be unable to work. Please replace the house or move Candy into a FC slot.

Candy is a sweet, bubbly hen who really loves corn. She's also a big fan of her namesake, and indulges in it so regularly that her eggs taste sugary! The yolks and albumen are even colored by her current favorites. This makes them surprisingly valuable to a few other members of the enclave, from an experimental potion regent to a snack for Trick and Treat.

Stuffing her face with treats and bartering eggs are only a hobby, however. Her true profession is as a highly capable animal handler and trapper. The head honcho in the Enclave's menagerie, she spends time managing Dante and Bandit's work, taking on the hard taming and captire jobs, and coordinating sales. Where the other two may fail, Candy always succeeds simply by being patient and kind.

Candy was abandoned to die at the tender age of two when her primary feathers first came in. Her superstitious town feared that the skulls inside her wings meant she would bring death and famine should she fledge, She was found and raised by Red, founder of the Whiptail Horror Enclave who was at that time still a wandering Doctor, and continues to mystify everyone by having a personality in such contrast with her adoptive mother.

Some mistake her kindness and generosity to mean she is weak in mind or body, but neither is true. Just beneath that cute orange exterior lies immense bravery, stamina, and the strength of someone who can wrestle down a wild Spirit! Something mysterious also dwells within her abilities that Enclave members refuse to talk to outsiders about. Perhaps her first family was not completely off the mark about her wings being an omen.