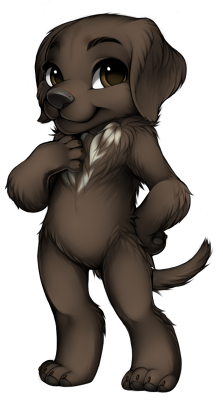 Alastair definitely isn't timid by any meaning of the word. He loves to bark and running around is his favorite thing to do!

He's wary of cats, but that's only because they used to bop his nose with their paws when he was just a puppy. He'll still be friendly to them when he becomes close to one, though.

Alastair loves sunny days, and he definitely loves rolling around in the grass whenever he gets a chance. Long walks are one of his favorite things!
However, the only thing that can make Alastair genuinely afraid is a nasty thunderstorm. He suffers from anxiety, and thunder and lightning set him off easier than anything. Whenever he hears thunder roaring, he'll immediately go into hiding and quiver until it's over.

Alastair also suffers from separation anxiety, and he never likes to be by himself. When everyone he's close to leaves home, he'll bark and cry and stare out the window until they get back.

He's somewhat aloof, and he's certainly the "love you from afar" type, though when he wants attention, he'll make it painfully clear.

♥based off my dog irl♥