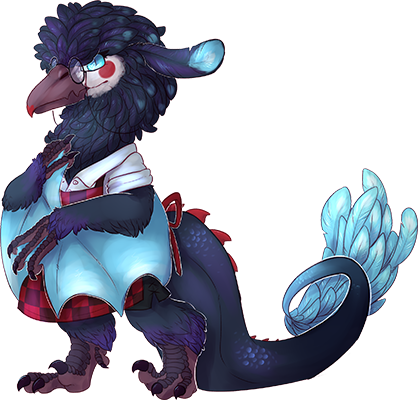 Bio/Information:
Laurhen Cossetalon is an easily startled Glacial Cockatrice who spends her time tinkering around and fixing things when she's not fumbling dancing on stage. A very nurturing but old fashioned dame, Laurhen is always eager to assist and coddle the much younger audiences, yet when it comes to dealing with the Ringleader Coulro, this bird is all peck and pinfeathers so to speak. That's not to say that she doesn't like her job or boss, in fact she loves it! And she kinda loves Coulro too, even if she'd never come outright with it in his presence. She just doesn't take any of his tomfoolery without booting him out of her workshop!

Being a mutant of a species born from a chicken egg raised by frogs and/or snakes means that Laurhen is extremely near sighted! To remedy this, she made her own set of spectacles. You rarely ever see her without them!