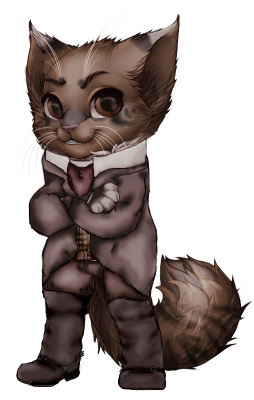 [[based heavily off of the historical figure John Wilkes Booth that I’ve studied for 4 years-- with his paintie modeled off of the cat version of him I made when I was, like, 10. to clarify, his name is actually John Whiskers Booth.... I was 10, ok]]
W.I.P
(john) wilkes || cis male || 26 years old || taurus || my dapper dandy cat child that i hate for many and obvious reasons
~ passionate ~

|| likes ||
romance
marksmanship
sword-fighting
fine clothing/wardrobe & money
Shakespeare
horse-riding (well. with this furry game, "horse-riding" can mean two very different things but i mean "horse-riding" as in the type we do (i hope). with the saddles and bridles and... i'll just... stop talking)

An explorer with a taste for acting and theatre who simultaneously longs for a more exciting (in his… rambunctious eyes) life and job-- but lacks the bravado and heart to do it. Before him and his siblings set off away from their childhood home to start their lives together and during his countless visits to his mother afterwards, time and time again he promised her to not get involved with anything risky. His role as an explorer has its risks, but compared to the more direct jobs such as a warrior, his career only gives him a slight taste of the adrenaline and excitement that comes with fending off monsters. His devoted bond with his mother especially as a favorite child, for the time being, halts him. And he wishes it didn’t.
|| Relations ||
Asia ~ Sister. She's only 3 years older than him and they grew up together-- thus making their bond nearly unbreakable. Wilkes comes to her often to vent, share secrets he'd never share with anyone else, and even the more minuscule activities reading, cooking, and singing with each-other. The traits they have in common; such as their fiery personalities and energetic wits; are what enabled them to continue to bond even through adulthood.

Joseph ~ Brother. 2 years younger than Wilkes. Their closeness in age builds up for rather frequent arguments and fights although most are solved within a day or two. When they aren’t fighting, however, they can be a mischievous pair, John’s playfulness and Joseph’s airy imagination making up for an array of jokes and minor pranks.

Rosalie ~ Sister. 15 years older than Wilkes. While her reclusive personality contrasts with Wilkes’-- Wilkes adores her, which started in his younger years where Rosalie would take the time to take walks through forested trails and roads. Both Asia and John (and Joseph is no different) get sulky and somber rather easily and Rosalie is the one to offer her own quiet support to her younger siblings.