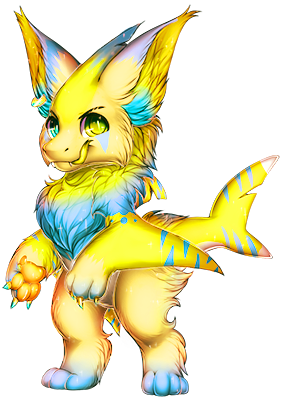 ソーダ no longer has a house! They will be unable to work. Please replace the house or move ソーダ into a FC slot.

B A C K S T O R Y
Hi! My names Soda and I'm 20 years of age, my friend, Shin calls me Ramune, Ramune means 'Lemon soda' in English and Ramune is the Japanese term for 'Lemon soda'.

If you guys are wondering 'why are you named Soda?' well, my mother named me Soda because of my color, I have bright yellow color and some parts of me are pink, light blue, and a little purple. So thats why I'm named Soda, my nickname was given to me by my friend and mother.

I like hanging around in the beach and surfing, I LOVE the water, I love making friends, but some just don't appreciate me, but that's okay there others out there that I can be friends with! I got my surfing skills from my mother, she was a champion surfer ever since she gave birth to me, but she died during a championship, during the championship there was a storm, and she got trap inside it, the medics and guards tried to get all the surfers out but, it was to late, there all gone.

Ever since the incident I always think that the storm would bring bad luck to me, but no it didn't. During my depression, I met another shark, who looks a little odd? He's a shark, but I didn't question it because he didn't question the way I look, he help and comfort me when I needed someone, and after that we became really great friends, up until now!

Thank you for giving me your time to read and know what happened to me.

And if you would like to hang out come with me to the beach and Lets go surf!
Lore made by Trabyte_36