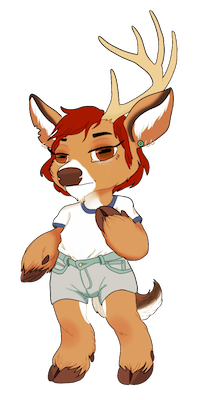 Úna no longer has a house! They will be unable to work. Please replace the house or move Úna into a FC slot.

Úna (oo-nuh) || 23 || Lesbian || she/her || trans
Chaotic Good, ISFJ, Phlematic, Hufflepuff
Úna, deer sweet Úna. Despite her seemingly uncaring facial expression that constantly graces her face and her monotone voice, she's a big softie. She's quite the rule breaker, but she does it because she thinks the rules are meant to be broken (at least for the greater good).

She doesn't really like to talk about her missing antler, so don't ask. Don't ask about the other one either as it is a constant reminder and source of stress. Úna would really like to find a way to remove it for good, but c'est la vie.

As for her job, Úna has always been into plants. To her, growing, harvesting, selling, and rinsing and repeating is just the routine she needs. Gardening isn't a thankless job in her eyes, It's always fun and never a chore. She's got quite the green thumb, err, hoof.