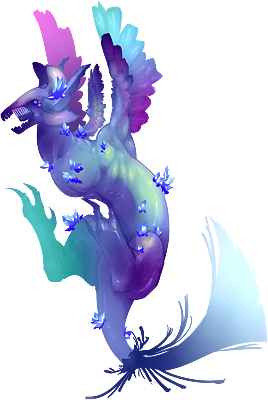 A Spellengle who loves to explore, although some of his discoveries have left him with a few... enemies, perhaps. However, he is far from worried about it, as he is easily powerful enough to protect himself. He is terribly lonely at times though, and would love more friends to explore with--being an incessant talker, and an emotive one (short little wings excitedly flapping about for emphasis) some people find him a little too overbearing to be near for an extended amount of time. But those who do stick around find themselves with an extremely loyal and upbeat friend!

Has a patchy relationship with Theo, who he isn't sure if this fella is an enemy or not. Well, sure Theo fights them on sight, but Theo isn't strong enough to really do any harm. And Theo refuses to use words, like a civilized Spellengle, so he continues to be flummoxed.

Atlas is fine with any pronouns, but since the Greek Titan is usually depicted as male, he's adopted using those pronouns when referring to himself.