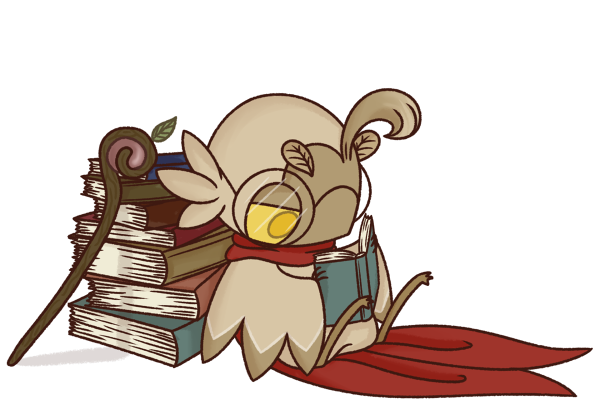 Simon is infected with Lycanthropy. Changes into a beastly monster after exposure to moonlight or especially frustrating board games. Howling at the moon relieves the symptoms for a little while, but use a Golden Apple for best results.

Simon very smart, shy and smol birdfolk who adores collecting old (spell)books and trinkets, drinking tea at home and watching the sky, flowers and other animals outside (from the comfort/safety of his own home/shop).

He owns a little books & trinkets store somewhere just past the border of Olde Foxbury, but because it's located so far away from the villagers, he rarely gets any customers (which he is totally fine with).
He often goes scouting for new things to sell, but due to his timid nature he usually doesn't make it further than the next 2 villages.

Most birdfolks have a tail, but not this little buddy. He wears a scarf to hide this ;o (as it takes up too much energy to constantly have to fabricate one with magic)
He's very very small, way smaller than most BFs, but he's actually not all that young. and here we have a lovely image of Simon man-handling his phone, drawn by @SparkySpro (even though he doesn't even own a phone but let's ignore that)