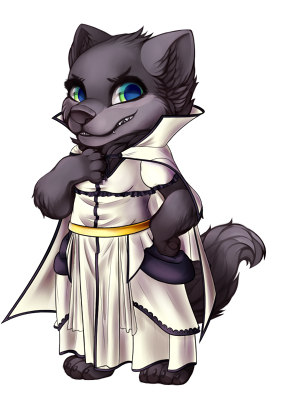 I am so sorry, I wasn't aware the wardrobe function bumps painties to the front page; why the hell does it do that

Onyx is one of two royal guards, mysterious protectors of an unknown being that rules their respective land. Both Onyx and Ivory are considered the right and left hand of their superior and act on their commands with unfaltering loyalty. Neither guard sways in any particular direction on the moral compass; the two simply complete their tasks in an appropriate manner, either together or alone if their superior desires so.


However, if the situation simply doesn’t accommodate for two well dressed women fighting with rapiers then they decide to use a more… unconventional method. You see… Onyx and Ivory are lycanthropes; a werewolf and werefox, respectively. Masters of their so-called “curse”, they can transform at will and use their bestial form to slay their enemies with abandon at the cost of destroying their beautiful clothing. However, the royal guards are not bothered about such frivolous things. Despite being expensive, to them their clothes are a dime a dozen; if they are required to kill a group of people then so be it. If their shredded clothing still clings to their bodies upon transforming back then they will simply rip the remains off and toss them aside, their fur providing them with the warmth they require until they can return home, or reapply the tattered silks and cloth in a more elegant manner.