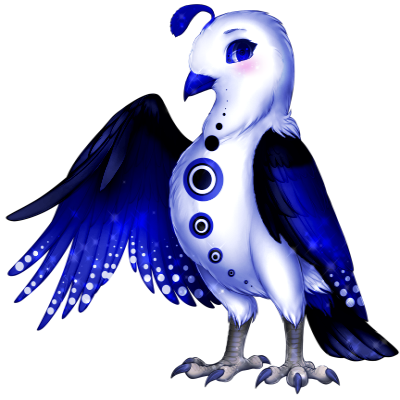 Mezzy no longer has a house! They will be unable to work. Please replace the house or move Mezzy into a FC slot.

Mesmerizes (but called Mezzy by Nullity) is a bird traded from Dubstep in return for the villager, Rocko (Now called Cocoa Joy)
. As time passed, Rocko finally grasped learning how to say full sentences and as the world around him grew, he finally decided he wanted to find where he came from. With some luck, he was able to find another pup of the same breed as him and thus why he decided to leave Nullity and the others. In return, Mezzy decided she too will leave her old life in order to pursue other tasks. What will the world have in store for Mezzy.

Personality: Mezzy was shy at first to know all of the villagers in Nullity's group but in time she was able to show her true colors. Mezzy is strong, bold and brave to show whats on her mind. Sometimes she'll passionately join in on arguments but she means well if she trails off. Some describe her as a "Flighty Birdbrain" but regardless, she still cares deeply about her comrades considering she has a lot of previous experiences with friendships.