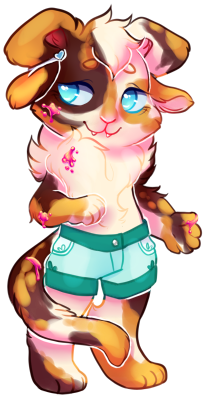 art by Leechid!
The most recent adopted Coffee Bun, Babycinno might just be the sweetest! A small bun with a knack for expression, he's the Coffee Bun most known for his interest in the arts and often takes things from Mocha, Macchiato and Latte in order to experiment with objects around Dragon's Maw Manor, and see how they'll paint (on various surfaces).

Babycinno was raised by the Soda Scrawlies, and grew up with the youngest Scrawly, Sunkist. Being in close proximity with the Soda Scrawlies in Dragon's Maw, Babycinno grew to acquire their affinity for materials used for art. He is often found drawing along any surface he can including floors and walls with materials he's mixed himself in order to find new colors, or stronger paints.

With his ever growing fascination for the arts, he's honed his skills and tries to help his old Scrawly family with their paints, often cleaning up their faces and drawing on them fondly. He cares about his Scrawlyface family a ton, and would do anything for them! The Coffee Buns having taken him in from the dangers surrounding Dragon's Maw understand his closeness and let him come and go as he pleases. My wonderful Babycinno paintie and art (sketches) were made by Jaquel and you should buy his painties and go bid in his auctions, he is the best birb and I support him in all he does. Please go check his things out. His doodle thread is here where you can buy the best busts for your buck!