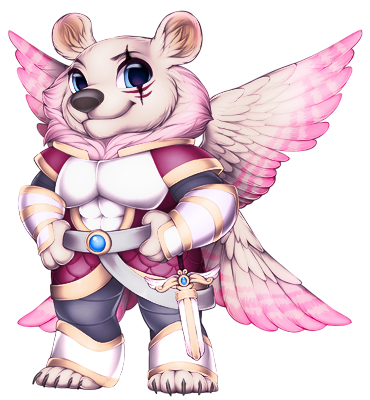 
As a young adult, Gladius found her life was… Lacking something. It wasn't that she was unhappy with her life, she just felt she wasn't doing enough to satisfy herself. While most of her friends had settled into the happy dating or married life, Gladius never really felt interested in that kind of thing. She wanted adventure. Thrills. Expressing her feelings to her friends, their idea of a thrill was an extravagant shopping spree and a night out in the clubs. Which, for the record, are things that Gladius does enjoy, but all the same, not the "thrill" she was looking for.

Day in and day out, it was the same routine over and over again. And every day, little by little, Gladius started to get frustrated with her mundane life. Her friends tried to talk her into dating, but she knew that alone wouldn't be enough to satisfy her. Instead, seeking a change of pace (and scenery), she decided to go on a temporary vacation out of her village. And that's when she found her calling.