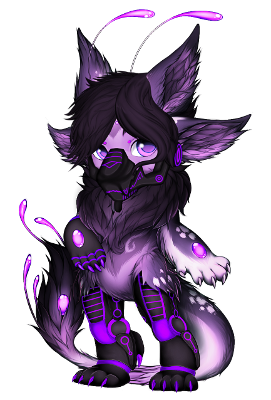 Backstory: Tchono was a prince from a highly intelligent, space-faring society. Keyword: was. His kingdom fell, his people were slaughtered, and his body was mutilated beyond reason before his throat was slit for the public to see.

Someone doesn’t know how to properly slit a throat.

Abilities: Scanner system can detect the makeup of objects. Expansive data banks. Small fabricator compartment in left leg can create objects when provided with proper materials (Think Subnautica fabricator). Dematerializer in mask compartment breaks down organic matter into energy for Tchono. Laser gun in palm with an innitial charge time of 3 minutes and a recharge time of 20 seconds.

Traits-: Disobedient to Tchono at times.

Backstory: Zev is an incredibly advanced AI unit that Tchono built himself. Zev is interconnected with Tchono through his spine, and the two share thoughts. Since Tchono can no longer talk, Zev voices his thoughts for him. This is misleading, as Tchono's rather grumpy about most things, and Zev makes him sound happier than he really is.

The two of them tend to speak collectively, referring to themselves as ‘we’ even though they are a fused unit at this point. They have maintained a high sense of individuality. While they will introduce themselves seperately, they still both respond to Tchono just fine.