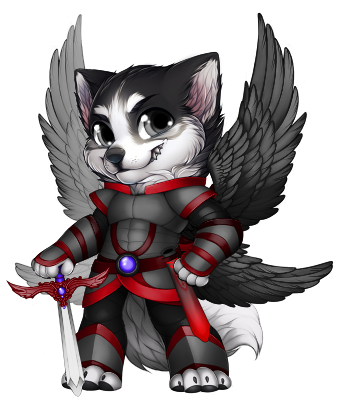 Theo no longer has a house! They will be unable to work. Please replace the house or move Theo into a FC slot.

Theo is the original residence of Quetzal Palace, he didn't fall from grace until he met Angel (Me) and Celestine the Village warrior that Angel found and hired to protect the Village. His old personality before he changed into a cocky assole, he was kind, caring, considered like almost everyone in Quetzal Palace, he was the second strongest out of all the angelic warriors in the village the first of course the Mayor Ana was the strongest but stern towards her guardian warriors she assigned Theo to look after the village when Angel arrived he helped her gather herbs and such for her medicine until she met Cecily then after a while Celestine who is the Village warrior Theo was confused he did not understand how a wolf much less a female fight with such ferocity without even wearing the fitted armour that was given to her more and more Theo became cocky and full of himself with each battle competing with Celestine but she just seemed to beat him in kills and battles Angel saw that Theo was becoming a Fallen Angel she was concerned for the Angel Warrior so she contacted Mayor Ana about it, she knew that Theo was changing and asked Angel if it would be the right thing to do was to banish him from the village,

Angel shook her head she didn't want Theo to become vengeful but Theo actually overheard them, he resented the Major and wanted revenge which he finally accepted that he is now a Fallen Angel, He didn't care though he was free and never have he felt such raw mean powerful emotions coursing through him, but he could not make himself hate Angel she was a beautiful pup and he thought she didn't need to feel his wrath so, he went on flirting with Angel trying to make her fall in love with him but Angel could sense that Theo was going to turn into a danger for the villagers so she tried her best to keep the peace. Mayor Ana gave a Guardian Gryphon to protect Angel because she sensed that Angel would be in danger which made Theo even more vengeful to the Mayor.

The villages of Quetzal Palace tolerate Theo for now and Celestine with their bitter and hateful rivalry to contain Theo from hurting anyone. Theo would just grin and sneer dangerously every time he would beat Celestine in a match to see who can kill the most monsters.