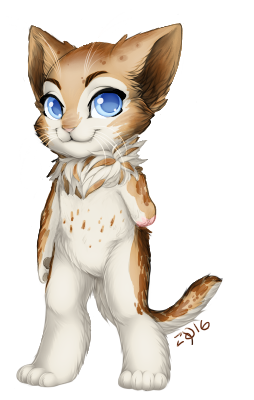 Hawkstar is the leader of Rainclan. He is a three-legged tom-cat with a heart of gold. He is charismatic and caring, and a natural-born leader. His clan loves him and he loves them back twice as much.

When Hawkstar was an apprentice, he wanted nothing more than to become a warrior. One night, he snuck out to further his practices in the hopes that he could become a warrior sooner. It was storming badly, but he persisted on to find the clearing where he and his mentor usually trained. But, due to the weather, he was badly turned around and ended up on the Thunderpath.

Before he could make sense of his surroundings and turn around, a car came out of nowhere and hit him, badly damaging his left leg. He could not walk, so there was no hope for escape. He was not ready to die, he thought to himself as the Twolegs jumped out of the monster and carried him inside. He passed out from pain and exhaustion.

When he woke up all he could smell was the overwhelming scent of Twolegs. He examined his surroundings and found himself in a shiny, den-like compartment. Across from him he could make out the shapes of other cats. As he went to stand up, he realized his leg was gone. After that, he was in and out of consciousness for the next few days, only waking when disturbed by Twolegs or nightmares.

The Twolegs that had brought him there came to collect him a few days later, he remembers being hauled back into their terrifying monster and brought to their home. Only then did it really set in that his leg was gone.

He made attempt after attempt to escape from the Twolegs, they did not seem to understand that he did not want to be here. One day, while they were out, he managed to flee out back into the woods and followed his heart home.

His clan had thought he had died, but when he returned they were overjoyed. Despite his missing leg, he refused to become a medicine cat and proceeded with his training as a warrior. He did not want to let one missing leg hinder him from achieving his dream.

A few months later, he was promoted to warrior rank along with his fellow apprentices. He had proven that he was a hard worker and had nothing short of devotion to his role.

He later became the leader of Rainclan, by proving that no matter what he goes through he will always come out stronger. He is a formidable opponent in battle, and an amazing hunter. There's no wonder he is the revered leader of Rainclan.

He is resilient, courageous, and kind. He leads Rainclan like no one else, and will do everything in his power to see his clan thrive.